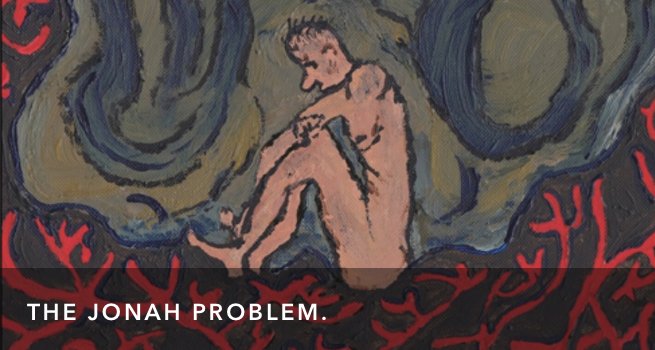 I was preaching from the book of Jonah once and came across an interesting thought about worship.

Most people know the set-up to the story, of course.  Jonah gets tapped by God to go “cry out” against the wickedness of the city of Nineveh.  But Nineveh was the capital city of the Assyrian empire, and from the perspective of little old Israel, these were the biggest bad guys.  They were the neighboring superpower that everyone looked over their shoulder for, and they were brutal.  The Assyrian army would sweep in and destroy everything, and then lead the inhabitants of the land away in chains to be resettled somewhere else.  There was no one in the neighborhood who could stand up to them.

Jonah didn’t want the job.  So he boarded a ship to head across the Mediterranean, as far as he could get from Nineveh and, the text says, “to flee from God’s presence.”

Of course, on the way a storm hits, and after a little “come to Jesus moment” with the ship’s pagan crew, Jonah ends up in the water.  Actually, he ends up in a big fish for three days and nights, and then get spat out on the dry land, headed back to Nineveh.

Finally, Jonah obeys God’s call, and preaches against the evils of the city.  But, wonder of wonders, something unexpected happens.  The people listen.  Instead of writing Jonah off as another washed-up crackpot street preacher, they listen, they get serious, and they repent.  You’d think it would be a preacher’s dream scenario, but instead Jonah was mad.

Turns out this was exactly why he didn’t want the job in the first place.  He knew that God was a God of mercy and loving-kindness, slow to anger and quick to forgive.  He knew that this was likely, and he didn’t want to be any part of it.  The people of Nineveh deserved God’s wrath, and if hearing the truth might cause them to reconsider their position and repent, then it was the last thing Jonah wanted.  His only and best hope for them was hellfire.

At the end of the book, Jonah and God have a little conversation.  If you’ve never read it, you should.  It’s actually the whole point of the book.  Like a stunningly good punchline at the end of a joke with a long build up, the final sentence is the thing that matters most in the whole story.  I wonder if this whole story is only in the Bible just to get to this moment.  (Which makes it sad that the punchline is the least known part of the story.  Turns out the big fish, and all the discussion about whether that could have happened or not, is an unfortunate distraction.)

But along the way, it occurred to me that there are three moments of worship in the book.  First, when Jonah is on the ship, the storm is swirling around, and the sailors are desperate.  So every one of them is praying feverishly to their various gods for some kind of hope of rescue.  That’s when the captain finds Jonah asleep in the hold, and wakes him up, begging him to pray to his god too.  After Jonah admits that this storm may be targeted at him, he convinces the sailors to throw him overboard.  (It’s interesting to me that even at this point in the story, Jonah would rather die in the water than repent on the hope that God might turn away the storm.)  When Jonah hit the water, the change in weather was so immediate and dramatic that the sailors still on board were awestruck.  They ended up holding a little worship service right then and there.

Jonah 1:16, “At this the men greatly feared the LORD, and they offered a sacrifice to the LORD and made vows to him.” These were pagans, worshipping a plethora of their own native gods, but when they saw the waves calm, they knew Jonah wasn’t kidding when he said, “I worship Yahweh, the God of heaven, who made the sea and the dry land.”  Immediately they offered sacrifices to this new God, and made vows to him.  Vows.  They made promises of service.  Surely their theology wasn’t square; they knew barely anything about the God of Jonah.  But they worshipped Him in awe and promised to live differently because of that encounter.

The second act of worship in the book is when Jonah is inside the fish.  He prays a lovely 9-verse prayer that sounds more like a Psalm than a cry for help.  It starts out acknowledging his plight – cast into the deep, waves closing over his head.  Then it turns and remembers God.  ”As my life was ebbing away, I remembered the Lord” (v.7)  The prayer ends thanking God for his deliverance.  Shortly after, Jonah ends up ejected onto the shore.

The third act of worship in the book is when the Ninevites repent.  They hear Jonah’s message, and they get serious.  They fast and pray and turn to God begging that his anger turn away from them.  Not only did they do the “religious stuff,” they actually stopped doing the evil things they had been doing.  Their prayer was sincere, and their actions showed it.

It’s interesting to me that when you look at these moments of worship, it wasn’t the Hebrew prophet raised in the knowledge of God who responded openly.  It was the pagans.  The sailors saw God act and, in response, worshipped him.  They made vows to change their ways.  The Ninevites heard Jonah’s message, and they sought God on the hope (on faith?) that He might have mercy for them.  They worshipped God and made changes in their behavior.

Jonah was the one who really knew God, or at least, knew all about God.  How did he respond to God when God showed up?  First he ran.  Then he decided he’d rather die than repent.  Then he obeyed, but only because he had to.  And then when God showed mercy to the city, he pouted.  He said he’d rather die than see this happen.  I’d laugh, if it wasn’t so sad, and so common.

It seems to me that the root of Jonah’s anger, and all of his avoidance behavior, is that he just didn’t want the Ninevites to be forgiven.  They were hateful.  They had probably caused the death of people he knew, or at least knew of.  They didn’t worship his God.  They were foreign and evil and, in Jonah’s mind, they deserved destruction.  And frankly, he wanted to sit on the hill under the tree, and watch the whole city burn, or get swallowed in an earthquake, or whatever epic smiting God had in store for them.  He knew about God’s love and mercy, but he didn’t really thinkthose people were worthy of it.  Jonah’s ability to worship was short-circuited by his judgement of who deserved God’s grace.

This is a problem the people of God fall into over and over.  How much of our conversation, of our preaching, of our theological bickering really comes down to fighting over who deserves God’s grace?  And all the while pagans who know nothing of God are turning to Him in open worship when they encounter Him.  They aren’t measuring their worth or anyone else’s. Why? Because  they already know know they aren’t worthy, and yet they seek God.  ”Who knows?” they say.  ”Maybe this God will turn from His anger so that we do not perish.” (3:9)

It’s only us, the ones who already know about God’s grace, the ones who have the story of God tucked in our back pockets, who are holding onto God’s anger for Him, and measuring out who is worthy and who is not.

If you have the good fortune of having been raised in a family that loved God and taught you about His mercy, if you have the unexpected blessing of having been rescued from the pit by an act of God, if you know about God’s loving-kindness, then you have no excuse for not throwing your heart to the ground in gratitude and wonder, and losing yourself in worship.  Don’t let it be that that the pagans in your life, the ones who know nothing of God’s mercy, truly worship before you do.  And don’t let it be your own judgement of who is worthy and who is not that stands in the way of your experience of transforming Grace.

Previous: Worshipping as a Child.
Next: Rich Mullins on what Christianity is Not.