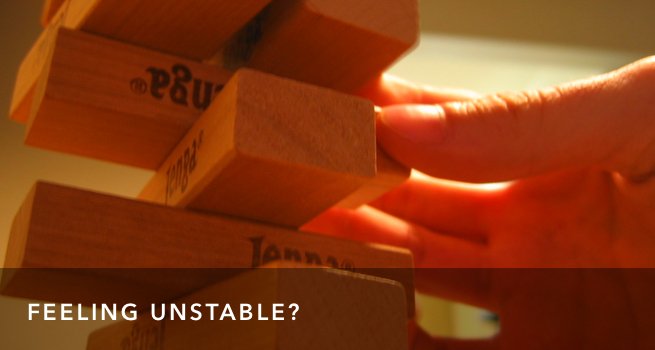 I was on a ladder, standing about six feet in the air when the whole thing just folded up underneath of me.

It’s one of those ladders made of four segments which you can fold in different ways. I had it configured as a 12’ straight ladder, leaning against my house. Apparently, I had not done a good job locking the middle joint. I learned that because my bucket of tools and I took an unexpected slow-motion trip back to the ground.

There’s a particular queasy feeling that seizes you when you thought you had something solid holding you up, and then it turns out you don’t.

That feeling that the foundation has fallen away is all around us right now. Promises were made. Work hard and you can be anything you wanted to be. Get into a good college and you’ll get a good job. Buy a house, pay your mortgage faithfully and you’ll be set for retirement. Be a good, honest citizen and you’ll always be treated fairly. Attend a good church, get involved, give a tithe, and the church (and God) will always be there for you.

All the promises have been broken.

The economy crashed. Good people lost their jobs and then their homes. Smart people are carrying years and years of college debt and can’t get good jobs. More and more stories of corruption, exclusion, and hatred fill our news feeds. Even the church hasn’t proven to be a safe haven when bully pastors, oppressive theology, exclusionary community and outright abuse shaped the experience of so many.

The institutions we have trusted for a sense of security have shown themselves untrustworthy. When the undergirding of your life falls away, where do you look for stability?

We’re not the first ones to feel this way.

A small community of Jesus’ followers in the late 1st century asked those very same questions.

Many of them were of Jewish background. Everything they had trusted for guidance was disappearing. The Temple and priestly system had been destroyed by the Romans.
Because they were also followers of Jesus, as years passed they were becoming less and less welcome in their Jewish communities.

By this time, a whole generation had passed since Jesus’ walked among them. The witnesses, people who had seen Jesus in the flesh, who had heard his teaching, even those who had seen him after the resurrection, almost all of those people had died.

This little community lived in Asia Minor, surrounded by competing religions—older religions as well as new sects promising deep secrets for connecting with the Divine. Then there were the Greek philosophers and their dualism. So many different ideas and world views!

The structures of life they had counted on—family, temple, synagogue, priesthood, the witnesses of Jesus—were disappearing. Does that sound familiar?

A word spoken into this confusion

It was in this community—at the very end of the 1st century, in Asia Minor—that a new telling of the story of Jesus emerged. This book was full of encouragement for the very questions these people were asking. Today we call this book the Gospel of John. John’s gospel opens with one of the most poetic and enigmatic passages in the Bible, John 1:1-5:

The passage opens with the phrase, “In the beginning was the Word.” The greek there is logos. This is the first answer John’s gospel gives to us when the foundation of our world is shaking.

Logos wasn’t originally a Christian word. It was a technical word from the Greek philosophers, that people were already familiar with. It wasn’t a religious word. It was a word that showed up in the conversations of educated people as they talked about the nature of reality.

For the Greek philosophers, the logos was the order behind everything, the blueprint of creation that defined the way things are. The logos was the scaffolding that holds up the universe. The Philosophers suggested that in a world of chaos and change and uncertainty, there was something behind the curtain that was stable and rational, something that could be depended on.

The author of John’s gospel takes this well-known word and gives it an unexpected turn. He doesn’t suggest that the pagan philosophers had it wrong. There is a foundation. The logos, this thing that always was from the beginning, this thing that was with God, that in fact was God, made everything.

That foundation?  It’s not a static force, or some vague guiding principle. It’s a person. “All things were created through Him.” See the personal pronoun? We’re not depending on the universe. We’re to depend on a divine person. That means a relationship. As John’s gospel unfolds we learn that this logos in fact is Jesus.

That something is not an idea. It’s not physics. It’s not the secret. It’s not the impersonal force in the universe. The foundation behind everything, the scaffold that brings order to our chaos, the source of light and life — it’s the word, it’s the One and Only Son, It’s Jesus Christ.

May you look to Jesus. When your foundation is shaking, and you feel more darkness than light, remember that you are not alone. There is One who has been since the beginning, One who has been with God and knows God’s heart for you, One who has brought light. In Him, you will find life.

Previous: The Target for a Life-Changing FTF Routine.
Next: The promise religion can’t keep, that Christmas does.