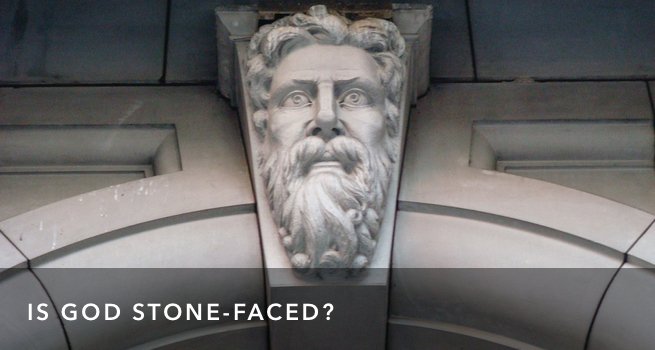 I remember seeing a Jesus movie as a kid, sometime in the middle seventies.

The Jesus in that film was haunting.  His long, blond hair hung limp down the sides of his gaunt face, framing piercing blue eyes that could see, I imagined, right into your heart.  He spoke quietly.  His words were delivered in succinct, crafted sentences with all the weight that one would have if they knew that their every word was scripture and would be written down for all to read.  He was aloof, above the problems of the dirty, hardscrabble peasants flocking around him.  He seemed to my young eyes distant and unmoved.

But if Jesus was aloof, that was an improvement over his Father.  At least Jesus had a tangible body and made the effort to walk in sandals on our earth, But God was far more removed.  In my imagination, I saw an over-large old man, faceless and yet somehow with a giant white beard.  He was “robed in power and majesty,” whatever that meant.  He was the creator who sustained the universe.  He was able, with a mind more powerful than all the computers and all the networks in the world, to watch over everyone, hear every prayer, consider every sparrow, and keep all the planets and galaxies spinning safely.

This God was something completely alien to me…

When it came to emotions, this God had nothing whatever to do with them.

When the Bible talked about his anger, that was just a way to say that his justice was very, very serious.  His love was a special kind of care that only God could have for every single thing he created, blades of grass and sparrows on up.  But there was nothing visceral to this love.  For that, we had to look to Jesus.

Having pastored full-time for sixteen years now, I’ve found that these mental images are not unique to me.  A lot of people, especially people who were raised in more strict, conservative streams of Christianity, can tell a similar story.  Perhaps it’s not what they were taught, but it’s the sense they gathered about God as they grew up.

But the truth is that this view of God isn’t scriptural at all.  The old bearded man has more to do with classical representations of Zeus, the head of the Greek gods, than it does with the description found in the Jewish and Christian scriptures.  The image of God as the unmoved mover who sustains the universe but has no real connection to us as people depends more on Greek philosophy and the dualism between flesh and spirit, than it does with what the Bible teaches.

In contrast to these ideas, the Bible portrays God in embarrassingly emotional language.  Zephaniah 3:17 portrays this God, the creator and king of the universe, taking so much pleasure in who you are that he shouts for joy over you.  The NIV translation of this verse says that he sings over you.

At creation, God took pleasure in his work.  When Solomon chose wisdom over wealth, God was pleased.  That’s the emotional response of satisfaction.  Jeremiah 31:3 tells us that God has loved all of us with a powerful, never-ending love, and that out of that emotional sense of care, He has drawn us to himself with kindness and compassion.

In Hosea 11:8, when God is faced with the prospect of bringing judgement on rebellious people, he expresses his heart, “How can I hand you over, Israel?  …My heart is changes within me; all my compassion is aroused.”  That’s a statement of an emotional reaction that welled up in God’s heart.

And then, uncomfortably, there are the hard emotions.  When humanity’s pride and violence spread across the earth, God was grieved, saddened, that he had made people and created this option.  Psalms 78:40 says that when people rebel against God’s ways, he feels sorrow.  In Deuteronomy 1:34-37 God’s people failed to trust him, and the scripture says that God got angry at this.  Exodus 34:14 says that God experiences jealousy.  That’s the emotional response to having what’s rightfully yours threatened.

We are uncomfortable with the idea of God feeling the hard emotions – anger, hatred, jealousy – and rightfully so.  In a future post, I’ll be addressing why I think this is, and why the Bible still presents this picture.  I think in every case there is a powerful and redemptive purpose.

But for now, just consider the range of emotions portrayed in the Bible.

This is without even considering the range of Jesus’ emotions!  This is a picture of a God who is intimately connected and passionately engaged.  This is a God who is moved by our failures and successes, who cares about who we are now, and who we are becoming.  This is not a distant being, but one who understands things like sorrow and joy – not in an academic, intellectual way (“Oh, sure, God knows everything.”) but because he has personal experience.

It’s common for Bible scholars and pastors to suggest that when the Bible uses this kind of language it’s just using human terms to describe God so we can understand him.  These descriptions of emotion are just anthropomorphizing God.  An example is when the Bible talks about God’s “Strong right hand.”  God doesn’t really have a hand.  That’s just a metaphor explaining that God is strong and able to act.  In the same way, emotional language describing God isn’t really accurate.

But this argument isn’t based in scripture.  It’s based on philosophical preconceptions and on our own discomfort with emotions.  The Bible describes God as spirit. He is invisible with no physical form.  As such Israel was forbidden to create images of Him.  So, when the Bible says that God has a “strong right hand,” that must then be a metaphor.  But there is no equivalent passage that tells us God has no emotions.  In fact, its clear description is just the opposite.

At first it may seem wise and safe to suggest that when the Bible says God is angry or jealous that this is just a metaphor.  But consider what that would really mean.  If God’s anger is a metaphor, so then is God’s compassion, even God’s love.  And what would compassion as a metaphor even mean?

Surely when we talk about God, all our words are incomplete.  We speak in metaphors because how else could we talk about a being that is so far beyond us?  Yet in some way that is hard to get our heads around, God’s emotions are not metaphorical.  The Bible does not portray God as emotional because we are projecting onto God things that we understand, but because God has chosen to reveal this about his own nature.

The Biblical truth is that God is an emotional being, and we are made in God’s image.  That means our emotions are made in God’s image.  That’s why we feel.  Sure, sin and pride have corrupted our emotions, like anything else, but in our best state we will still feel emotions.  For example, when you feel intense anger over injustice, you are feeling like God does, and that’s a good thing.

Undoubtedly someone will wonder why this discussion matters.  If I’m more comfortable with the idea that God doesn’t feel emotions, why is that a problem?  It’s really quite simple.  The Christian mandate is to become more and more like God.  Ephesians 4 tells us that God’s purpose is to grow us up in the image of Christ.  That means the picture we hold in our minds of Jesus, the beliefs we have about the character of God, matter enormously.  That picture – right or wrong – is who we are becoming.

If we believe that God has no emotions, then we must also believe that to become more spiritual means to become less emotional.  It means that God must not ever want to guide us or communicate with us through our emotions.  It means that this significant part of who we are is meant to be removed from our lives, that in the best case we will “mature out of” our emotions.  The result of this set of assumptions is inauthenticity, fear, lack of intimacy, and spiritual stagnancy.  If emotions aren’t meant to play a role in our spiritual lives, than all we are left with is dogma and duty.

Fortunately for us this is not the case.  The Bible paints a picture of a God who has powerful emotions, who is even motivated by these emotions, and all without sin.  That is a picture of hope for us.  It means that our emotions are not a flaw in the design or a sinful condition to be overcome.  There is a way to live with our emotions, to experience them powerfully, and still grow and mature spiritually.  In fact, maybe it’s the case that we cannot grow spiritually to the level God desires if our emotions don’t grow and mature as well.

Previous: 5 Things You Learned About Emotion in Church That Aren’t True.
Next: Myth #2: Emotions Will Lead You Astray.