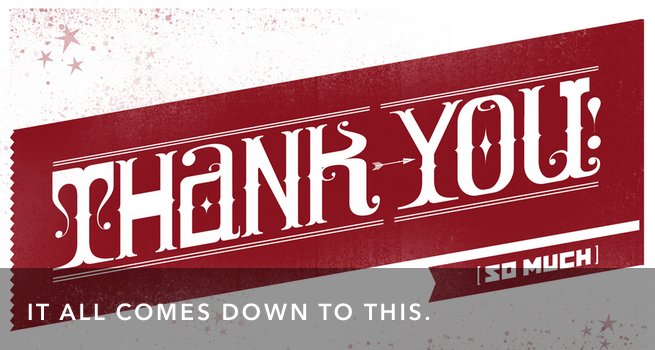 There are some things my parents used to say to me that I never thought I’d ever say.  But things have changed.  Now that I have a 4 1/2 year old and 3 year old running around the house, I’m starting to sound a bit like a broken record (or perhaps a sampled drum loop, if we need a less anachronistic metaphor.)

One of those phrases is, “What do you say?”  I say this pretty much constantly.

It’s not just the words that elude them.  It’s the entire experience of gratitude.  Right now we’re working the 4 1/2 year old on this thing she’s been doing lately.  She’ll be off somewhere, and come running into the kitchen, and see that her little brother already has his juice, or dinner, or some snack.  She’ll see what he has, and her little face will tense up, and immediately her first words, in a high and whiney voice, will be “Where’s my cookie?” “When do I get my cup of juice?”  ”Where’s miiiiiinnnneee?”

Right now she’s having to leave the room a lot, so she can enter again saying something different, like “Hey that cookie looks good.  May I have one?”  or even better, “Hey dad, thanks for making dinner!”  Her first response is not gratitude.  Her first response is to be painfully aware that someone else has what she wants.  My heart can be the very same way.

Being thankful can be hard.  Sometimes it’s not – when someone really stands in the gap for you, or gives you a great present.  That’s when the emotion of gratitude wells up, and you express it with showers of thanks and hugs – or however you express gratitude.  But there are a lot of times when we don’t feel that, a lot of times when it doesn’t even occur to us to feel it.

I think the reason for this is that saying “thank you” points out an uncomfortable truth to us.

It reminds us that we are not everything we think we are.  We’re not self-sustaining and strong.  We don’t keep our promises.  We can’t solve all our own problems.  “Thank you” reminds us that we owe someone else something.  Unfortunately, that runs against our mythology that we can do this life on our own, that we’ve built everything in our lives ourselves.

Jesus told this insightful little story in Luke 18:9-14.  There were two guys who headed down to the temple to pray.  One was a Pharisee – the good guy, noticeably religious, respected by everyone, always doing the right thing.  The other guy was a tax collector – disrespected, even hated, for his profession and his betrayal of his own people, forced to live outside of community because no one would welcome him in.  Both of these guys were seeking God, but their prayers couldn’t be more different.

The tax collector wouldn’t even look up to heaven, and only prayed, “God, have mercy on me, a sinner.”  He knew his life was out of alignment with God’s heart.  He knew his position in the community.  He knew he had nothing to hold over God.  He knew that anything he got was an act of mercy.

But the Pharisee’s prayer was different.  Listen to his words.  “God, I thank you…”  That’s a good start, right?  I mean, if you started every prayer you ever prayed for the rest of your life this way, you’d be in a pretty good place.  So what was he thankful for?    ”God, I thank you that I am not like other people – robbers, evildoers, adulterers – or even this tax collector…”  What he’s thankful for is that he’s not a sinner (at least in his own estimation).  He’s thankful that his life isn’t all falling apart, that he’s not like those people.  You might think that he was heading into a “there but for the grace of God go I” kind of prayer, but he’s not.  The next words are a window right into his heart.

“God, I thank you that I am not like other people – robbers, evildoers, adulterers – or even this tax collector.  I fast twice a week, and give a tenth of all I get.”  Do you see where his gratitude is aimed?  It’s for himself.  It’s for his own efforts.  He thinks that he has something over on God because he does the right religious things.  He thinks that his favorable position is because of his own effort.  That’s exactly the difference between him and the tax collector.

The tax collector knew that he had nothing to offer.  The pharisee thought that he was impressing God.  What sounded like gratitude was actually self-affirmation.  Look at what I can do.  I’m so thankful I’m me.  If that’s how you really feel, then you don’t have much room for feeling gratitude.  After all, everything you are and have came from your own hard work, right?  There’s nothing to celebrate, no one to thank but yourself.  Notice that Jesus said that it was the tax collector who went home justified with God.

With the first perspective we begin to relate to God contractually.  We’ve paid our dues, and fulfilled our responsibilities.  So now, anything God does is just performing His end of the deal.  We don’t feel thankful toward God, because truth be told, we sort of feel like He owes us.  God is just our vendor-of-choice for affirmation, justification, eternal life, whatever.  After all, we don’t jump up and down in gratitude each month when Comcast continues to deliver cable and internet to our house.  Why not?  Because we paid them.  They owe us that service.

With the second perspective we see the world differently.  I believe we see it accurately.  There is a God.  I’m not it.  I am not the sole inventor of my own success.  I cannot justify myself.  I cannot claim complete credit.  I am the recipient of enormous grace.  I was born into a country I did not choose.  I was given a family I didn’t earn.  My skills were honed with the guidance of coaches and mentors.  My successes came from opportunities that wouldn’t have existed without other people.  Even the food on my table was picked by others.  Every day that I live comes to me as a gift from the God who sustains my breath.  The possibility of me being connected to that God in a real relationship is entirely grace and mercy.  When I realize these things, the only rational response is gratitude.

The Bible calls that response by another name as well:  Worship.  When we see all that God has done for us, and we respond with gratitude, we are worshipping.  And this kind of worship is particularly important.  It isn’t just an emotional response, and thank-you isn’t just something you say.  It’s a discipline that changes your heart.  Gratitude keeps us centered.  It corrects our thinking that all we are and all we have came to us from our own efforts, and it opens the doorway to a real relationship with God.

Previous: Declare Your Creed-In-Process.
Next: Worshipping as a Child.