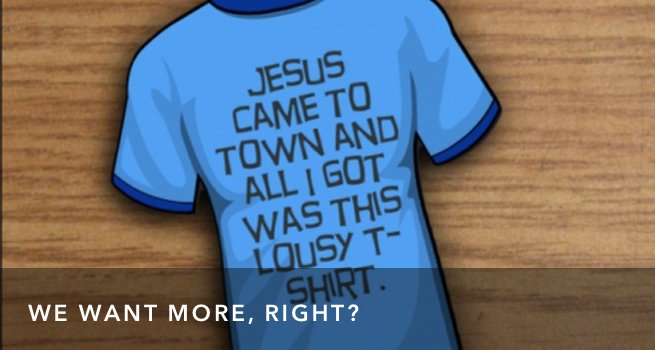 That Didn’t Turn Out So Well!

A while back I was working through the Gospel of Matthew in my personal worship time.  I came across a sad couple of verses at the very end of chapter 13.  They challenged me and I thought they were worth passing on to you.  The story is in Matthew 13:54-58.

Jesus had been out in the countryside teaching people and doing miracles.  As he moved from place to place he came to his own hometown.  Instead of getting a hero’s welcome, he got cynicism.  The people there immediately dismissed him.

They knew Jesus growing up.  Some of them played with him.  Some of them babysat him and changed his diapers.  They knew his family.  None of them were of a mind to be taught by him.  Not only did they dismiss him, they were insulted by him.  ”Who is this guy to think he can teach us?”  That was their mindset.

The idea that Jesus might have something new to offer them was offensive.

The story closes with this sad line:  ”He did not do many miracles there because of their lack of faith.”

But in his own home town, people didn’t have time for him.  Why?

They Knew Jesus Too Well.

They knew too much about Jesus – at least in their own minds.  They thought they knew everything there was to know.  They were the ones who had seen him grow up.  They were the ones with special insight into the backstory of this famous new preacher.  What could he possibly have to offer them?

They were comfortable with the relationship they already had with Jesus.  He was one of the kids who grew up with them.  He was the son of their local carpenter.  He wasn’t that special.  For Jesus to come back into town trying to teach them, to tell them something new spiritually, that was offensive.  It violated the relationship they already had.

The end result was a missed opportunity.

Jesus came to their town, and they got nothing.  The people who were special to Jesus because he grew up with them got nothing.  Not because Jesus didn’t offer, but because they weren’t open.

I’m one of those folks who “grew up with Jesus.”  I’ve known about Jesus as long as I can remember knowing.  Years of church school classes and sermons have populated by head with ideas about Jesus.  As a pastor, I’ve studied Jesus now for years.  I can’t count the number of books I’ve read about Him.  I can easily feel like I know everything there is to know about Him and His teaching.  I am so familiar with Jesus that I run the risk of having my preconceptions shut the door to God’s new work. Do I know too much about Jesus?

Is What You Already Know Keeping You From Growing?

There are a lot of ways to apply this passage, but my heart immediately turned to worship.  When I come to worship, am I coming with an expectation of meeting Jesus there?  When I read the text, do I anticipate meeting God in the words?  When I kick off the groove leading the worship team, am I open to the possibility of Jesus showing up and derailing my plan?  When I stand in gathered worship, am I hoping for anything more than songs I know and like?

I suspect that the power in our worship experiences is directly proportional to the expectation we bring.  Matthew said the folks in Jesus’ town missed miracles because of their lack of faith.  What about us?

Note: This post is the core of a sermon of mine.  If you’d like to hear more, including more of the Biblical background, you can watch it here, on Youtube. November 10, 2012  “Familiarity & Desire”

Previous: A Dirty Worship Experience
Next: How To Get What You Want From God