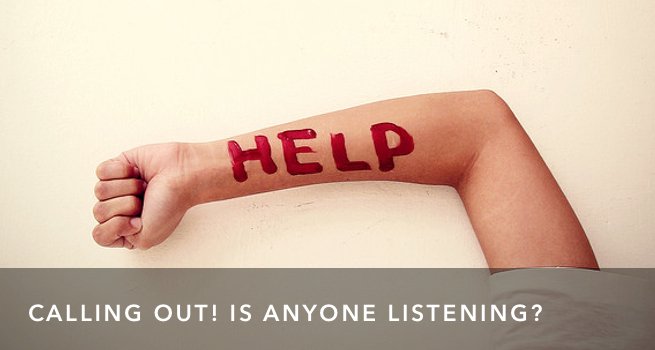 This post is for just some of you. If you’re sailing along with everything working in your life, go ahead and skip this one. I’m glad for you. Really, I am! This post, however, probably won’t be helpful to you. Instead, let me recommend this for you.

Now, the rest of you?

This post is for you. Things aren’t working. Circumstances are painful. Maybe you’re trying hard to avoid making some hard decisions. In the middle of all of that, you might feel disconnected from God. The intercom is broken, like no one’s listening.

I am so there. Or at least I was. Then somethng happened at the post office, and then on Twitter, and then again at the breakfast table.

I had some business in my local Post Office branch. I walked into the dingy waiting area, taking my place behind a handful of others. There were four stations at the counter. One was open, staffed by a tired-looking postal employee.

Across from him was an old man, face hermitted behind a grey shaggy beard, what Santa might look like if there was no Mrs. Clause to wake up to. He was wearing an old trucker’s hat, pulled down tight to his eyes. He was waving a little orange slip in the air and yelling. It was one of those slips you get when a package couldn’t be delivered to your home. Instead of getting your package, you get an invitation to just come on down to the post office and pick it up yourself.

Apparently this was his third trip to the post office to recover these packages. Apparently no one could find them. This was a problem because these packages contained medication, pills he desperately needed. Pills, by the way, that he couldn’t afford to buy in the US because of the predatory practices of the drug companies. Buying overseas was the only way he could afford to stay alive!

I know all of this because Angry Trucker Hat Guy was waving his pick-up slip, pounding on the counter and yelling at the top of his lungs. I got to stand in line for thirty-five minutes watching the whole thing unfold.

At first, I was irritated. I had plans. I needed to get on with my day. But I’ve been praying about living with less hurry. Ha! So, I decided to settle in and be patient so that my prayers wouldn’t be completely hypocritical. Then I was embarrassed and sad for the postal worker who had to weather this storm. After a while I started to think about Trucker Hat Guy.

The more I watched him, the more clearly I could hear what he was saying. Wth all of his orange-slip waving and banging and yelling, he was really saying one thing over and over.

Then I saw myself.

As I was sitting patiently in the tension that filled the post office, I realized I was looking in a mirror.

I’ve been doing some slip-waving and counter-pounding of my own lately. This summer, this year… It is not what I had planned. My plans were great ones. Finish a book proposal. Finally launch the online course I’m working on. Build a treehouse for the kids. Live at a slower, more peaceful pace.

But my family and I have been swept up in circusmtances beyond our control. Life is changing rapidly and uncomfortably. I’m coming up on a couple deadlines, moments when hard decision have to be made. I don’t want to make them. What I want is for my circumstances to be different. *Stomp foot* Apparently, I don’t get that.

In my attitude, in my prayers, I’ve been banging my fists on the counter demanding to know if anyone is listening to me. Do you see yourself in the mirror yet?

Then He Lifted Me Out of the Pit

Two nights ago something strange happened for me. I was doing one final check on Twitter. (I’ve been working hard on Twitter these days. I’m working on a book and in order to sell a book to publishers these days, you have to have an online following. So, I’m doing what I can do to build that without selling my soul. Anyway…) As I scanned my timeline a tweet came through to me. Addressed to me directly. It was a link to a music video from someone I don’t know, someone I’ve never heard of. For some reason they addressed this link to me.

Normally I skip strange links from folks I don’t know. But for some reason, I watched the video. As the artist sang, a sense of emotional overwhelm rose up in my chest.

“This time for you is critical… Take your burden and put it in His hands… He’s holding you, consoling you, He’s got it in control. He’s working it out.” (Hat tip & the song: Michael Edmonds.)

The lyrics were triumphal, a little more hope-and-joy than I’m naturally inclined to seek out. But the promise edged into my brain. “God is working it out. Don’t you worry. He’s working it out.” I tweeted back thanks, and rolled into bed with a seed of hope.

The next morning, it happened again. At breakfast I read a chapter to my kids of the Jesus Storybook Bible. (Highly recommend it to you! Take a look.) The next chapter was the story of Israel crossing the red sea. The message? When you’re caught in a corner and there’s no way out, God can make a way. I heard an echo. “Don’t you worry. He’s working it out.”

After I took the kids to school, I got on my treadmill and started journaling. Raw, angry words clattered onto my screen. How did I get into this situation? Why can’t these circumstances be different? I can’t solve this. I can’t fix this. Where are You?!

But then the music video came to mind, and the story at breakfast. It felt like a tease, empty promises in the middle of my pit. I closed my rant down and with little more than duty as my motivation, opened my Bible. I’ve been reading a chapter a day for a while, and today’s chapter was Matthew 6.

“Therefore I tell you, do not worry aout your life…” The words came and I just broke down.

“Don’t worry about what you will eat or what you will drink; or about your body, what you will wear… Who of you by worrying can add a single hour to his life? …But seek first his Kingdom and his righteousness, and all these things will be given to you as well. Therefore do not worry about tomorrow, for tomorrow will worry about itself.”

A deep breath left my body. My shoulders loosened. It seemed like the fog of anxiety parted. “Do not worry. Are you not more valuable than the birds of the field? Your heavenly Father knows what you need. Do not worry.”

I’m not a particulary charismatic Christian. I don’t go looking for signs behind every circumstance. But here, on Twitter, and at breakfast, and on my treadmill I think God spoke to me.

My Prayer for You.

I wanted to tell you these stories today. I don’t have 5 easy bullet points in this post, no next steps that you can apply, to help you deal with fear. Today I only have my story. I’ll click post. I’ll send these words out into the ether.

Then I’ll pray that these stories will find you and that when they do, whether it’s today, or months from now, you’ll hear God speak.  “I see You. I know what you need. I will not leave You alone. I will provide. Do not worry.”

Previous: Weekend Wisdom / When Your Plans Failing is the Best Thing For You
Next: Read to Grow / Radically Normal (or Are you suffering from Spiritual Accomplishment Urgency Syndrome?)