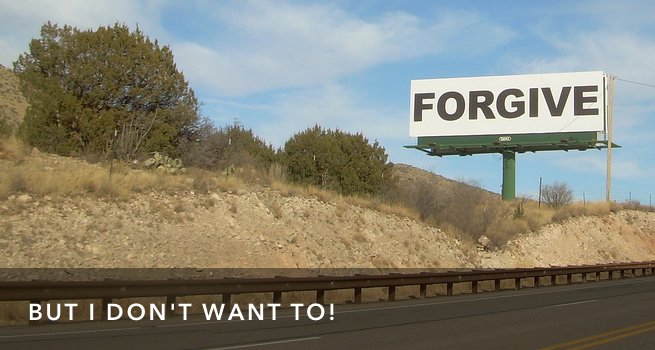 When my children turned 5 and 6, I started re-living my own elementary school experiences. Apparently comebacks haven’t changed much in 35 years.

Call someone a name and you’ll hear, “I know you are, but what am I?” Mention that odor wafting in, someone will chime, “Whoever smelt it, dealt it!” Blame someone for something, and you’ll get: “If you’re pointing the finger at me, there are three pointing back at you!”

My last post, “Does the church hate forgiveness?” pointed a blaming finger. Some readers pushed back. The church is just the people, they said. It’s not the church that hates forgiveness, it’s specific people. Even worse, someone had the guts to point out that what we condemn in others, we often struggle with ourselves.

Is it really just me that hates forgiveness?

I Love Being Forgiven

“No!” I protest. Forgiveness has changed my life. God’s grace is all that’s has kept me in the church and in ministry. There’s nothing I can do to make God love me more or less. I’m adopted not because of my performance, but simply because of God’s mercy. This motivates me and shapes my life!

But the question burrowed deeper.

I was just talking about me, God’s grace and forgiveness for me. But there are other people out there.  God’s grace extends to them too, right? Regardless of their choices. People who hurt and abuse, who exclude and degrade, liars, cheaters and thieves. God’s grace is available for them too.

Sure, we can talk about the need for repentance. We can remind each other that God’s not content to leave us where we started. But that doesn’t change the wild and unexpected availability of grace! Think of the thieves crucified with Jesus. They were criminals given a capital punishment. Yet, Jesus was ready to walk them into paradise, if they wanted to go with Him.

Having pastored for eighteen years, I’ve seen forgiveness work miracles. I’ve seen a homeless meth addict change forever; get married, build a career, have grandkids. I’ve seen adulterers accepted home and forgiven, and end with happy marriages. I’ve seen pastors betray their people and calling, who then go through the long tunnel of transformation and come out the other side forgiven, more whole and effective in new ministry.

But what about forgiving?

But the people who hurt me? The question pushed harder and deeper in. Real stories of malicious hurt and betrayal surfaced. People who had hurt me and the ones I love. The word that rang in my ears was, “Unforgivable!” They don’t deserve it! At least that’s how I remember feeling in the moment of the injury.

I can still remember the intensity of the pain.  First the pain of the hurt, but then later, the molten pain of my fight with forgiveness.

Sure, I can forgive them.

…when they say they’re sorry.

…When they make things right.

…When they tell the world how wrong they were and how right I am!

Then we can talk forgiveness.

Ugh… So I hate forgiveness too.

I hate how hard it is. I hate how much effort it takes. I hate how it asks me to overlook whether they deserve it or not. I hate it showing how deeply the need to be right is embedded in my heart.

Most of all, I hate that I’m supposed to forgive people who haven’t paid the cost. I remember that pain particularly in one situation where I felt betrayed. I loved this person and I could imagine some future, a long ways off, where all had been forgiven. But in that moment I wanted them to pay. I wanted them to feel pain too, their relationships torn and the community looking down on them. I’d be happy to forgive but only once the price was paid.

But see, that’s the problem. In Jesus’ bloody body, the price for every betrayal, every abuse, every injury was already paid in full. If I’m honest, I hate forgiveness because it upends my sense of fairness.

The economy of this world is simple: Work hard and you will earn credit. Reputation. Affirmation. Compensation. You worked for it; it’s yours. Forgiveness will not comply with this system.

I know this, but my heart still has a lock grip on the blankie of legalism. If you do the right thing, God will reward you. If you pay the price, you will be forgiven. It’s not Biblical. It’s not the character of God, but it’s pretty human.

The church has a problem with forgiveness because the church is made up of broken humans (like me) who can’t fathom that in the end God’s kingdom is not a meritocracy. (Tweet that!)

For some of us, and I am one, God is breaking through our iron-clad hearts. We are seeing that our performance buys us nothing that matters. God is unwrapping our layers of legalism, helping us let go of our need to perform in order to belong.

We are seeing, I am seeing, that everything is grace and forgiveness is the way in.

Question: What struggles does forgiveness bring up for you?

Previous: Does the church hate forgiveness? (Like Jonah)
Next: The role of attitude in spiritual growth