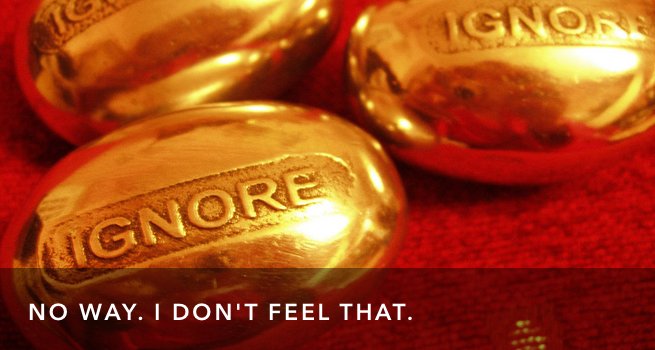 And now onto the last myth in this series:  Myth #5.  Ignore your emotions and they will just go away.

This is the myth that does the most damage.  The body count is enormous—marriages ended, relationships broken, churches split and destroyed—all because people with influence were unwilling to stop and look at the uncomfortable emotions they are feeling.

So, we practice denial.  We change the subject.  We take antacids for the clenching in our gut and anti-depressants for the sadness in our spirits.  We treat our negative emotions like the symptoms of a cold, medicating them into suppression so that we can get on with our lives.

But it doesn’t work that way.

In his book Emotionally Healthy Spirituality, Peter Scazerro talks about our emotional life and health in terms of an iceberg.

Only the smallest fraction is visible above the surface of the water.  In our visible lives we try to appear “fine”, but beneath the surface everything is not OK.  Collected below is the stored pain, sadness, grief, and anger that we are desperate to avoid.  As much as we hope to ignore those feelings, they just won’t stay put.

Non-metaphorical icebergs do an interesting thing when they start to melt.  As the amount of ice above the surface of the water diminishes, the weight and balance of the iceberg changes.  If the conditions are right, the iceberg founders.  With a thunderous crack the iceberg flips over, crashing into the water sending waves in every direction, with it’s underbelly exposed to the sky.  It’s dramatic and even dangerous to be near an iceberg that’s foundering.

The same thing happens to us.  Trying to contain all of that unprocessed emotion takes its toll.  These painful emotions leak out in sharp words and tones.  They leaches into other conversations and conflicts causing us to over-react.  They surface in passive-aggression and avoidance behavior.  And then, when the conditions are right—when we’re hungry, angry, lonely, or tired, when something goes wrong in our world—our iceberg flips over to devastating effect.  The pain and anger beneath the surface becomes visible to everyone around us in often hurtful ways.

Icebergs flip.  We flip out.  Hiding, avoiding and denying won’t stop it.  But it doesn’t have to happen.  God gave you your emotions for a reason.  There’s important information in your emotions.  Processing them, listening to them, sharing them; this allows you to find healing and release.

Previous: Myth #4: Emotional Christians are Shallow.
Next: Want to Be Heard? Get a Platform.

9 thoughts on “Myth #5: Ignore Your Emotions and They Will Just Go Away”