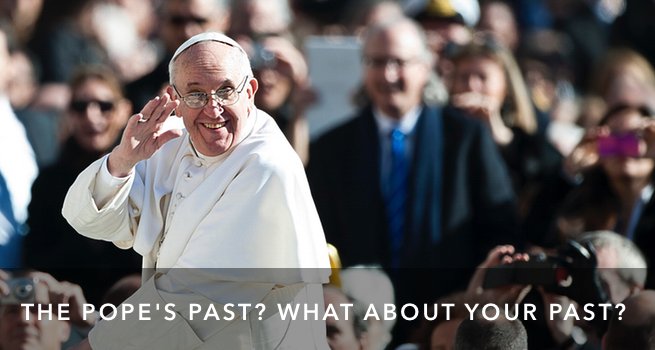 So, is the Pope a kidnapper?

On March 13th the white smoke billowed and the world was introduced to the new leader of the Catholic faith.  Cardinal Jorge Mario Bergoglio went into the conclave and came out Francis the 1st.

The news was first celebratory.  The first pope from the Americas!  A Latin American pope!  A pope who is an advocate for the poor!  A pope who seems, from credible sources, to not be blinded by pomp, power, and benefits.  This seems stunning and full of hopeful possibilities.

Then something happened.  The talking heads started talking about darker things.  The pope had tied to the military government of Argentina during the “Dirty War” in the ’70s.  The pope failed to advocate for kidnapping victims, or maybe, had even delivered those victims to the kidnappers to be tortured!

Now, I can’t speak to the new pope’s past. As a dyed in the wool protestant, I’m a little down on the idea of popes in general.  But as I heard the news developing, I remembered that the very same thing happened when Cardinal Ratzinger became the pope.  Within days of his appointment, the news was swamped in stories about the cardinal’s youthful connections to the Nazis.

The pope is for many people a spiritual leader.  He leads the largest Christian denomination.  Many Catholics still consider his official words to be infallible.  The idea that such a leader has blood on his hands is deeply disturbing, right?

The Pope’s Past Is A Trap!

The media has been breathlessly asking:  Does the new pope have blood on his hands?

I don’t know, but I can assume that he likely does.  (What?!  Yes… keep reading.)  Even if he’s a truly godly man, fully committed to the care of the oppressed, and has been so his entire life unwaveringly, he still has blood on his hands.  How do I know that?  Because he’s human and he lives within a human institution, trying to do good things in a complicated world.

Did Cardinal Ratzinger have Nazi ties?  Probably so.  For God’s sake, every single German over the age of 75 has Nazi ties of some kind.  They were sort of mandatory at the time and most everyone who refused them got killed for it.  For the same reason, I can assume that Pope Francis I did some questionable things in a very difficult and violent time in his country.  Or maybe I’m completely wrong about this.

It’s not just the pope who gets this treatment.  Every spiritual leader gets it.  We do it to anyone our lives who get elevated to something above us.  Are they deserving?  Are they the kind of person who ought to have this authority?  Are they good enough?  And always, are they hypocrites?

The Double Standard of Past Choices

When we do this, it reveals more about us than about the object of our inspection.  I’ll call it the Double Standard of Past Choices.  Here’s how it goes.

That, my friends, is called hypocrisy.  And ultimately, it doesn’t matter one bit.  The question of whether the pope’s hands are clean or not is a trap.  Here’s why:

Other people’s failures are a convenient distraction from looking where you ought to look: at yourself.  It’s all the better if those failures are enormous, and the person is a public figure (like… you know, the pope).  Make no mistake.  This distraction serves you.  Looking at your own stuff is often painful.

But if you truly want to grow, you must embrace this truth: Spiritual growth starts when you stop using excuses to avoid looking at your own junk.

The best, most convenient, and most righteous-feeling excuse to avoid looking at my junk is fixating on yours. The more I can be indignant about how terrible you are, the less my behavior matters.  The more I can deconstruct your bad theology, the less I have to consider my own inconsistent and self-serving beliefs.  When I look at you with an eye of evaluation, I can ignore my own truth.

I am also a walking contradiction, inconsistent and lacking integrity.  Too often my best, most Godly decisions are motivated by my own pride.  Worse, I’ve done shameful things that, were they public knowledge and used to determine the measure of my life, would disqualify me from any kind of respect.

Judge or Grow.  Choose one.

This is true whether you’re comparing yourself against other people’s failures, or against their successes.  Turning your eyes towards them takes your eyes off of your journey.   This tendency runs deep in us, and it is one of the highest obstacles to a deeper spiritual journey.

In John 21 Peter, the disciple, looked at another person and asked such a comparison-based question.  Instead of answering, Jesus re-directed.  His’ answer gives us a path forward.  Peter asked, “Well, what about that guy?”  Jesus answered, “What is that to you?  You must follow me”

Jesus’ words give us two simple reminders that will keep us on track.

So, does the pope have blood on his hands?  I don’t know, but the only hands I’m qualified to be thinking about are my own.

Question for you:  What do you think of the pope’s past?  How does this matter (or not) for you?

Previous: Keeping feelings and faith separate can kill you!
Next: My Easter gift to you: The Story Your Heart is Desperate to Hear

4 thoughts on “Is the Pope a kidnapper? That Question is a Trap.”