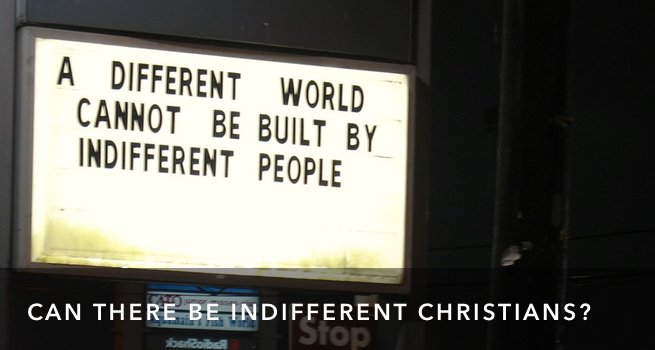 In 2012 I attended the Justice Conference, here in Portland.  It was amazing.  Like conferences often are, it was a fire hose of information.  When I left the conference late Saturday night, I was over-full.  I wanted to reflect, to not open my mouth for weeks.  The friend I rode with felt the same and we made the drive home mostly in silence.  At one and the same time I was overwhelmed by the need I had encountered, as well as excited and motivated to see how I and my family could make a difference.  I felt like I could journal for days without even scratching the surface.

It really challenged me in my thinking. Why is it that Christians are just so indifferent?

The conference was of course informative. (Did you know that child prostitutes can be bought in India for about the cost of an American latte?  Did you know that statistically women are the largest at-risk people group in the world in every category?  Did you know that there are more people in slavery today worldwide than in the entire 400 years of the African slave trade?)

It was helpful theologically, especially in a climate where so many Christians think that social justice is the arena of the liberal and post-modern church.  (Read Jeremiah 22:15-16, Psalms 103:6 & Matthew 25:31-46.  There is simply no getting around these texts—and conservative, literally-minded believers of the Bible should be the first to agree.)

But more than just informing, it was motivating.  The stories were so compelling: Children rescued from sex trafficking.  Girls graduating college who never imagined anything like that for themselves.  Villages transformed by the efforts of a couple of women who had been empowered by strategic philanthropy.  A native American man who finally learned that being a follower of Jesus didn’t require him becoming white.  A large church that decided in order to have integrity to Jesus’ command to love your neighbor as yourself they would give away half of their tithe income.

The information made the cause of Justice seem so overwhelming.  The world, the world’s systems, seem broken beyond any conceivable human intervention.  But the personal stories made the cause seem doable.  Real followers of Jesus are making real choices that bring more shalom — more peace, more neighborliness, more equity, more opportunities — to real people who are desperate.

I still have miles of processing to do for myself, but I wanted to reflect on one question that came up for me.  It’s not my intention to do a review of the conference or recount all the teaching I heard.  I’m sure that will be well-handled by others. (Here’s a great compilation of conference notes and  another blogger’s reflection on how the conference impacted her.  For more, just open a twitter search on #Justice2012 and scroll through the flood of reflection on this event.)

I also expect that I’ll probably write a number of posts that emerge from my reflections, and, if you happen to attend Bridge City Community Church, you’ll probably get a teaching series or two this year that grows out of this experience.  But, here, in this post, I want to share what was a deep and motivating realization for me.

First some background on the word “justice” in this context:  When the word is used in relationship to God, it is often understood as something like criminal justice.  The thinking goes like this:  “There are bad people.  They do bad things.  In the end God won’t let them get away with it.  They will face consequences.  That will be justice.”

Other times this word is reserved to refer to a specific theological idea.  This one runs:  “God is holy.  Humans are sinful.  Sin can’t exist in God’s presence.  But God makes humanity holy through the act of Jesus’ death on the cross.  This sacrifice paid the penalty required for sin by the law.  This fulfilled both mercy (doing this for us) and justice (paying the required price).  In this way, God enacts justice.”  Both of these ideas reflect themes found in the Bible, but neither of them is what justice generally means.  More accurately, both of these are facets of a much larger story.

To really unpack this would take a long post of it’s own (Here’s an in-depth discussion if you’re inclined) so in order to move things along to the point I want to make, I’ll allow Zechariah 7:9 to stand in as the Biblical definition of Justice.  It’s broader than this, but this makes the point.   “This is what the LORD Almighty says: ‘Administer true justice; show mercy and compassion to one another.”

What is true justice?  Mercy and compassion.  Where does God’s mercy and compassion find it’s outlet?  Well, everywhere to be sure.  But it finds particular expression in God’s care for those who cannot stand for themselves — the widow, the orphan, the stranger, the foreigner who lives among you, and the poor.  (Wondering if this is so?  Check out Isaiah 1:17, Isaiah 10:1-2, Proverbs 29:7 and Deuteronomy 27:19 and then realize that this is only four our of hundreds of verses.)

Love is justice.  Justice is love.

It is fundamental for us to acknowledge that justice, understood in this way, is a part of God’s character.  1st John 4:8 says that God is love.  But that means that God is also justice.  The two are inextricably linked.  Not so sure?  Think about this.

I love my son and daughter.  They are precious to me.  I care for them.  I feel warmth and affection for them.  I like to do nice things for them.  That’s all part of love.  But there’s a harder facet to my love.  When one of them does something that could end in pain, like running into the street, I am moved to intervene in some way.  When something hurts one of them, I feels hurt.  If someone threatens my child, I get angry and protective.  If, God forbid, one of my children was kidnapped, or sexually abused, or terribly injured by someone, I would feel a powerful negative emotion towards whoever did these things.  It would certainly be anger, and it would probably be fair to call it hate.  That’s all a part of my love.  These emotions motivate me in how I relate to my children, in how I protect them, in how I teach them.

So in my love, there is more than just good feelings and forgiveness.  And I’m just a broken sinful human.  God’s love is infinitely more vast than mine, and it includes so much more than what I can contain.

Hmm…  Maybe I feel these things because I was created in God’s image?

The question that remains, if all of this is true, is this:

Why don’t God’s people have the same feelings God does on these issues?

By the way, if you’re struggling with the idea that God has emotions, you’re not alone.  Most of us have been taught the opposite.  In fact, there’s a good chance if you grew up in the church you learned a lot of things about emotions that aren’t true or helpful.  Here’s a post of mine with five common myths you might have learned.  If you’d like to think a little bit about God’s emotions, here’s something to get you started.

So, why would this matter?  What does God’s emotion have to do with justice?  I think it offers the answer the question I could not escape during the conference:  Why isn’t there a flood of followers of Jesus giving their time, talent and resources for the cause of the needy?  Why does justice seem to be the concern of only a few?

I’ll tackle that in Part 2:  If you feel like God, you will do justice.

Previous: Get a great speaker
Next: If you feel like God, You will do justice.

4 thoughts on “Love, Justice & the Problem of Indifferent Christians.”