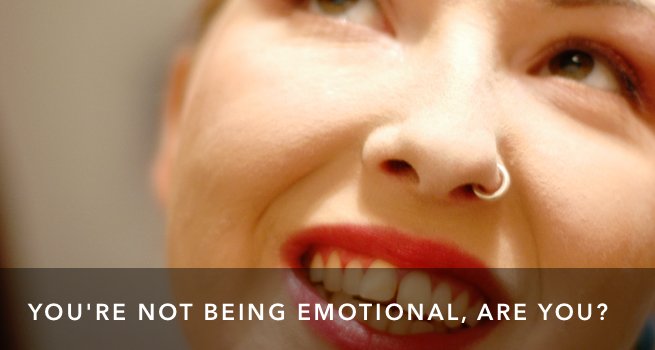 Try something for me.  Wherever you are right now—at your computer, or iPad or iPhone—look away from the screen.  If there’s a mirror there, all the better.  Take stock of how you feel, and then when you’re ready say this sentence:

The culture that we live in views being reasonable as a more elevated, more mature, more evolved state than being emotional.  Add -ism to the words and the distinction gets even more obvious.  Dictionary.com gives this definition for Rationalism: “The principle or habit of accepting reason as the supreme authority in matters of opinion, belief, or conduct.”

The definition for Emotionalism?  There are four.  Not one is positive.

Often those of us who believe the Genesis creation story act like God created us rational, but sin made us emotional.  I grew up in a Christian tribe that believed this whole-heartedly (umm… whole-mindedly?)  Our faith was based on our intellectual capacity.  Our precious spiritual practices?  Memorizing scripture, debating theology, understanding and being able to communicate complicated philosophical ideas.  The more a preacher used Greek and Hebrew and addressed the issues of systematic theology, the better he (always he) was.  Even our music was intellectual.  Either it was the old hymns, remarkable for six verses of dense theology, or it was classical music, which was superior because like Math or Literature (I was told), it edified the mind.

We were wary of allowing emotionalism into our worship services.  Music that incorporated syncopation or a moving bass line was suspect, even attacked as pagan.  Preachers that addressed people’s emotional well-being were few and far between, and most of them were accused of dabbling in pop-psychology.  Charismatic churches with their emotional alter calls were condemned for leading people astray.

I stretch the truth only a little.  I know that many others experienced a formative religion much like this.  The message that I got clear as a bell was that emotions were not something to let others see.  Playing out this story has led to enormous damage in my life and the lives of the people around me.

If we take the Genesis creation story seriously, than we cannot make it say things it doesn’t.  What it does say is this:  Humanity was created in the image of God.  There is no verses that says emotions were an afterthought, or that they came around as an unfortunate result of sin.  Without that, we must assume that in some manner our emotions are also made in the image of God, and that they fulfill an important and necessary role in our lives.

This means that thinking (or feeling) that emotional Christians just aren’t mature isn’t fair or accurate.  In fact, this belief undermines our spiritual growth and intimacy with God.  We are left, then, with this quest:  Discovering how to experience and engage our emotions in a constructive way that serves to deepen our spiritual journey, our relationship with God, and our maturity as human beings.

Previous: Myth #3: Emotions Aren’t Spiritual
Next: Myth #5: Ignore Your Emotions and They Will Just Go Away