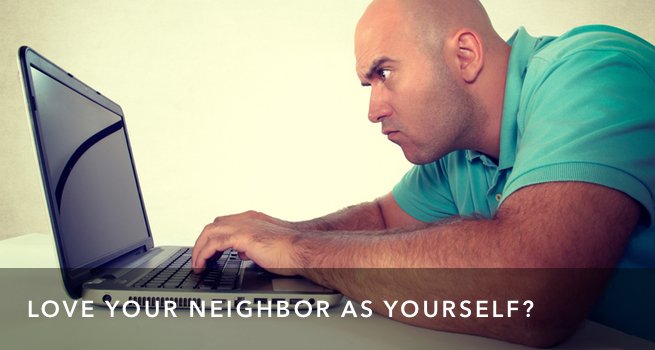 Honestly, it wasn’t Facebook’s fault. It had more to do with us—our level of relational wisdom and our lack of experience with digital communication—but Facebook was the vehicle. We drove the car into the ditch. You can’t blame the car.

Days before the debacle, Arizona had passed SB1070. You may remember this controversial bill requiring police to question people about their immigration status if the officer had any reason to suspect the person might be in the country illegally.

Of course, having skin of a certain color might be interpreted as reason to suspect, and that was the controversy. Was Arizona encoding racial profiling into law?

Immediately this became a national argument. Some Christian leaders spoke out against the law. One of those, Jim Wallace, wrote a post saying, “This law will make it illegal to love your neighbor in Arizona, and will force us to disobey Jesus and his gospel. We will not comply.”

Those are strong words, words that Christians across the country had to stop and contemplate. Certainly, they did in our community. A core member and leader posted Jim Wallace’s quote and a link to the article on Facebook.

The next five days were some of the most horrible I’ve ever experienced in ministry.

People chimed in supporting, thanking the original poster for their courage. After all, this is the sort of thing that needs discussion. Some people argued about the law and its intentions. People who were not lawyers started trying to interpret and challenge the language of the law. Others argued about whether this person should have posted anything about this to begin with. This person were accused of being divisive, violating their role as a leader. Of course, they had posted because they felt this was important for the church to take a stand on.

The thread’s temperature escalated like a forest fire. People who had worshiped side-by-side for years began attacking each other. With innuendo and outright accusation, people named each other judgemental, not very Christian, even racist. I knew we’d reached Three-Alarm-Fire status was someone made a reference to the Nazis.

Others in the community tried calming the blaze. They appealed to friendship, to our church relationships. They asked if we could talk about these things in person. They cautioned people to be careful with their words. It was a plant mister in the face of a conflagration. Others shot back. If we really were friends (accusation implied!), if we really were really Christians, we should be able to talk about these things!

By the time the conversation ended, twenty Bridge City people were involved in the thread, not to mention friends and gawkers. A number of relationships were significantly damaged. All this happened in a public place where hundreds of people got to watch the carnage unfold.

You have a couple of experiences like that, and you start thinking, “Maybe I don’t need digital communication in my life at all!”

At this point, digital communication is a nearly unavoidable part of modern life. These tools are just so dang convenient.

These are amazing & powerful tools, but like any power tool, care is required! Power tools can help you get the job done quickly, with much less effort. But they don’t offer much nuance or margin for error. If you’re not careful with a power tool, you can make a big mess and do a lot of damage.

Part of the problem is that we just really don’t have good standards and intuition about how to use these tools. Humanity has had countless generations to get accustomed to face-to-face communication. Over time, we’ve learned lessons that make for healthy and constructive relationships. Our parents and elders have passed those lessons on to us.

But pervasive digital communication is utterly new. It’s a significant element of our lives that our parents and grandparents simply didn’t have. Even though we consider ourselves experts, the truth is that we’re stumbling around in a new context, making messes as we go.

But that’s not what happened. This conversation happened in the new town square — Facebook, and the consequences were not digital. The pain and loss happened in real life.

For you and I, as followers of Jesus, we must think through this part of our lives. How do digital communication and online relationships impact our faith? Our church communities? Our spiritual journey?

If these are an unavoidable part of life, how do we bring our faith into this new space? How does following Jesus change the way we speak and interact online?

Have you answered these questions?

Part of learning how to live in this new space is considering what it means to follow Jesus online?

Short answer. No. In fact, these common “online Christian” behaviors are not very helpful at all.

In the next series of posts, we’re going to unpack this conversation. We’re going to look at some of the essential weaknesses of digital communication that we often ignore, and that can easily violate our calling as Jesus’ followers. Then we’ll talk about a model for bringing the ethic of following Jesus into the online space. But until then, consider these questions for yourself.

This is a whole new world, one that no group of humans has ever inhabited before. We are learning how to live in this space, and we’re mostly doing it by accident.

It’s high time that we gave some intentional thought to what it means for us to be part of Jesus’ tribe living in this new country.

Previous: Praying for Open Eyes: See Yourself as God Sees You
Next: 3 fatal tendencies crippling your online communication

12 thoughts on “Is your online life Christian?”