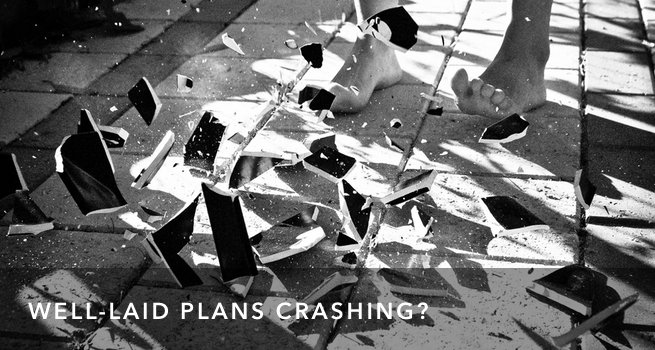 Then life, and circumstances and God didn’t cooperate with my plans. After depression and nearly burning out, I started growing emotionally and spiritually. I found myself questioning some of my motives and plans. Then my wife ran out of steam. She’d been carrying me emotionally for too long. She needed her own recovery. The plans I had for how my family ought to look disolved. Some wonderful, gifted, and impactful people moved on from our church. The plans I envisioned no longer seemed possible.

Even these last three months, my plans fell apart! Circumstances were out of my control. All my discretionary moments, the ones I had planned on using for writing, were called into service. No forward motion on my book. No forward motion on my online course. I couldn’t stay on top of my blogging schedule or my Facebook page. I felt like I fell off the rails.

This week I found an unexpected reminder that has entirely shifted my attitude. If you’re feeling like life and circumstances and God aren’t cooperating with you, maybe it will encourage you too.

Wait! That’s not in the plan!

As a part of my First Things First process, I read a short section of scripture and journal on it. Just having finished one book, I decided to start the Gospel of Matthew.

The 1st chapter begins with Jesus’ ancestry and the introduction to the well-known story of Jesus’ birth. As I read, I felt a connection to Joseph. And not in a good way!

Joseph had plans. He was engaged to an eligible woman. He was getting married, growing his family and influence in the community. Those were good steps. The right steps, at least in the eys of his community.

Then Mary told him the news.

Now, Joseph seems like a nice man. He didn’t want to be a complete jerk. He decided that he wouldn’t marry Mary, but he wouldn’t make a big deal out of it. He didn’t want to take on someone else’s drama, but he also didn’t feel the need to, for example, have her stoned for adultery (which he could have done.) I imageine that he wanted out of the drama and consequences. He wanted to get back to his plans.

Is God allowed to do that?

Here’s where I had my insight. See, I’ve been feeling put out and frustrated that my plans have been derailed. I’ve been fighting it, feeling like I needed to get my plans back on track.

But then there’s Joseph’s story. All his plans got derailed, and it was exactly what God wanted. In fact, God was in the process of giving birth to something new and powerful in the middle of Joseph’s mess. His plans were in tatters; God’s plans were just starting to take shape!

Now, as A Good Christian Kid™ I’m long-trained to accept God’s plans when they show up. Trust God. God has good plans for us! Right? But what if God’s plans include a mess? What if they include something downright ungodly?

Joseph’s plans were the ones the good synagogue people approved of. Marry a good girl. Work hard. Grow your influence in the community. Be a Godly man, living above reproach. That’s how God leads us to live, right? That’s a Godly life, right?
Getting pregnant outside of marriage? That’s not godly! In Joseph’s culture marrying a woman pregnant with another man’s child was not OK. The law said she could justifiably be executed for adultery. He’d be marrying a criminal. He’s be raising a child that wasn’t his. That child would be a reminder, every day of his life, of the stain on his marriage, on his wife, on his reputation. That can’t be Godly, right?

Yet, it was exactly what God wanted.

Now, I understand this reflection is really focused on the male perspective. I know there are other ways to see this story. I know that this isn’t what you’d call good clean exegesis. But, as I was journaling, this one thought impacted me deeply.

I’ve been struggling all summer feeling that my plans were falling apart. Some of the things that have been happening are decidedly messy, not something I want to brag about, not something that fits my image of the good life. But what if this mess is exactly what God wants to do in my life?

Perhaps you’re fighting with the collapse of your own plans. Maybe other people’s terrible choices have splashed onto you, and you’re walking around bearing the consequences of their mess. Maybe the soil has been hard, and the seeds you’ve planted didn’t take. Maybe the mess you’re in right now is exactly the space God needs to birth an amazing act of salvation and grace in your life and community.

May you open your arms to God, who is at work creating life in chaos, and grow in trust, that this God sees you, cares for you, and has good things planned for you—even when your own plans are falling apart.

10 thoughts on “What if God wants your plans to fall apart?”