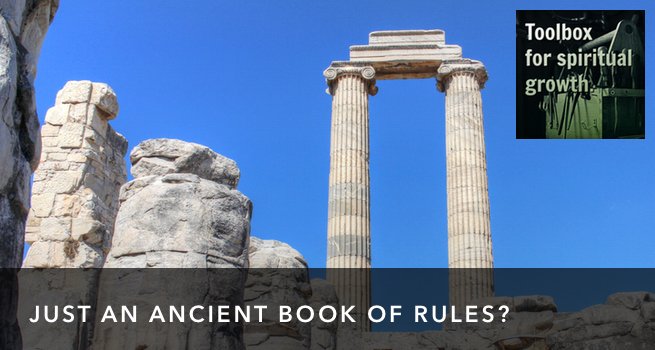 From time to time you’ll hear some preacher hold forth on the state of our country. He’ll (It’s almost always a man) point out the terrible ills in society and the ever-increasing immorality.

With waving arms, he’ll decry Biblical illiteracy. He’ll say if only there was more Bible reading, more Bible-believing, more following of rules in the Bible, the tide would be reversed.

His prescription, however, won’t make a difference.

I spent fifteen years working with high school students who had grown up in a particular conservative Christian denomination. Most had been in Bible classes since they could sit still. They had been memorizing scripture their whole lives. I have never met before or since a group of kids with so much exposure to the Bible.

Yet they were generally not any more spiritual than other kids I’ve met. Many of them didn’t have any sense of a relationship with God. As this cohort of students grew up and started their adult lives, I watched a large swath leave the church of their childhood. Quite a number left Christianity altogether. Even though they knew the Bible like the back of their hands!

Or maybe they left, exactly because they knew their Bible so well. They had been taught the Bible. They had memorized Bible verses. They sat through sermon after sermon. But what they heard, for many of them, made no difference. Why?

Most people don’t have a relationship with an encyclopedia.

I was sitting in my office where I was serving as a chaplain. This was a private Christian school where the kids were inundated with the Bible. She was a senior, ready to step into her adult life in the coming months. Her story was one I had heard again and again.

The Bible had been introduced to her as a rule book, a religious HR manual, an encyclopedia for living. She’d heard the famous Bible stories—Daniel and the Lion’s Den, Noah and the Ark, David and Goliath. As she grew the emphasis moved from stories that engaged to rules that governed. This is where she, and so many of her peers, got lost.

When they got to a place in life where they could make their own choices, they set the Bible aside. For them it was little more than a Policy and Procedure Manual. Come on. Who’s inspired by that?

That’s when I told her, “Maybe you need to ignore the rules in the Bible for now.” I couldn’t believe the words coming out of my mouth. She looked stunned. I felt stunned. But those words were the beginning of an incredible conversation about faith, hope and Jesus. They were the start of a spiritual journey that took her closer to God, rather than farther away.

Your story may be different from these students, but many people share this same belief about the Bible. They think it’s nothing more than an antiquated book of religious rules meant to govern your behavior.

When we read the Bible out of context, we start making up our own story.

This isn’t a crazy belief to hold. The Bible certainly does contain its share of rules. The books Leviticus, Numbers and Deuteronomy are, in many parts, a collection of the laws of the ancient nation of Israel. The prophets often condemned people’s behavior. Even in the New Testament, the Apostle Paul left us a handful of lists citing good behaviors and bad ones. There’s no question that there are rules and standards in the Bible.

Most of the time, though, specific verses that condemn certain behaviors are quoted in isolation, like religious bumper stickers. We strip them of their context, the story they took place in. Who was this said to? Why was it said? Without the context, we lose any connection with the real meaning of the text itself—and then we start making up our own sense of meaning.

We communicate the impression that the main purpose of the Bible is to guide behavior. It’s not.

Nope. The Bible’s main purpose is not to guide behavior. Behavior is one aspect of our lives, and it matters. The Bible, however, is much broader than the things we avoid or the things we do. Listen to the claims in the Bible about the purpose of scripture.

To Guide us to Jesus.

At the end of John’s gospel, the author gives us insight into why that book was written.

Jesus performed many other signs in the presence of His disciples that are not written in this book. But these are written so that you may believe Jesus is the Messiah, the Son of God, and by believing you may have life in His name. – John 20:30-31

John’s gospel was written for a specific purpose: so that you could be engaged by the story of Jesus and moved to believe in Him. While the context of this verse is specifically about the gospel of John, it points us in an interesting direction for scripture as a whole.

To give us hope.

For whatever was written in the past was written for our instruction, so that we may have hope through endurance and through the encouragement from the Scriptures. – Romans 15:4

Here Paul is referring back to the Old Testament—what was written in the past. Does he say these scriptures were written so that we could know all the rules and behave better? Not at all. He says that all the scripture written in the past was written so that we might have hope and encouragement. Hope and encouragement! That’s something altogether different than rules and regulations.

There certainly are rules and standards in the Bible–many of them serve to make life better, and assist in our ability to love God and the people around us.  But when you pay attention to the context, you’ll find that some of them apply to us today and some of them don’t. While the Bible claims to be good for teaching and to have authority in our lives, nowhere does it claim to be a comprehensive manual governing every choice we have to make.

How to see the Bible as more than rules.

The belief that the Bible is just an anachronistic rule book pushing an outdated morality is a roadblock to experiencing God. If this is your struggle, how can you change that mindset?

Remember that verses that talk about behavior, rules and guidelines are literally a fraction of the entire book. The Bible is made up of something more than 31,000 verses. By the widest possible definition about 6000 of those verses are instructions or commands. That’s not 6000 separate commands. Most of those are duplication and repetition. From the broadest viewpoint, less than 20% of the Bible is made up of rules. That means that more than 80% of the Bible is something else. 80%. That seems important. So, what might that be?

Every rule or command in the Bible falls within a certain context. We glean the context by knowing who wrote the words, who they were writing to, where those words fall in the story or argument, what book they are in, what was the historical circumstance of the author and audience, and where this passage falls in the over-arching narrative of the whole Bible.

When you start to examine the context of these verses, you’ll discover a variety of things.

Some of those rules were for very specific people in specific circumstances. That means they don’t apply to everyone all the time. Some of the rules or commands were given for a specific time and culture. Some are commands and standards that apply to your life today.

It’s always fair to ask if those culturally conditioned commands represent a principle that might apply today. We should ask that question, so long as we keep in mind that getting to the answer will require more study than simply reading this one verse.

Even iron-clad rules are about something more important than behavior. Think of a good parent and how they relate to their children. Parents enforce certain rules strictly for their toddlers. You can’t cross the street. You can’t touch the knives in the kitchen. You may not hit your sister. The rules are black and white and strongly enforced.

As that kid matures, do the parents keep enforcing those rules in the same way? No, not in a healthy family. Some rules change. Some rules fall away. Other rules are added. You can cross the street on your own, but you can’t drive the car. You can use the kitchen knives with permission, but you can’t own a gun.

Does that mean the original rules were wrong? No! It would be naive  and superficial to make that claim. Behind each of those rules were principles. A good parent wants to see their children healthy and whole. The rules were just a developmentally-appropriate expression of the principle that mattered. When that kid becomes an adult, the rules will fall by the wayside, but hopefully the principles they expressed will have been embedded deeply in the fabric of their character. In every case, the rule serves a more important governing principle. When you come across rules in scripture, keep this in mind.

Finally, remember that every rule or standard falls inside of a much larger story. All the books of the Bible come together to tell this larger story. They come from different cultures and contexts, different authors, but they weave together into a greater tapestry. The theme of the tapestry is not the rules or your behavior. The theme is what God has done among a certain group of people and how God is inviting you to participate in God’s work in the world.

There are some instructions, some guidelines, some rules. But those only matter in the context of a relationship with God and that’s the point. Get to know the One who wants to speak to you through these ancient words. I promise that as you do, the rules that matter will be brought to your attention, and the ones the don’t will fade into the background, as you start actually hearing from God.

11 thoughts on “Maybe you need to ignore the rules in the Bible.”