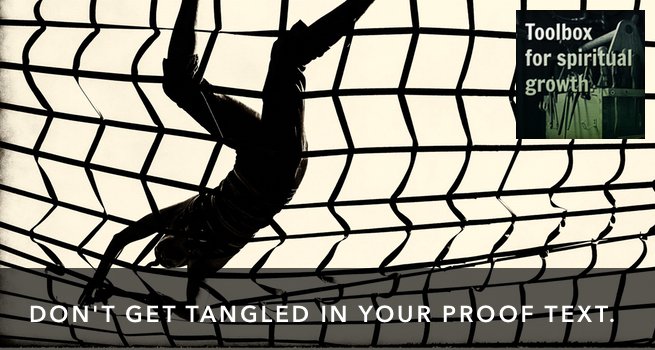 If you read comments online, you’ve undoubtedly seen this scenario:

Someone is upset about some behavior or other. They hammer out their comment declaring that such-and-such is PROHIBITED BY THE BIBLE!!! Almost immediately someone else retorts so is wearing polyester and eating shell fish.

I still feel that anxious cringe whenever some crazy on TV starts quoting scripture to justify his teenage wives, or his white supremacy, or war in the middle east. It’s not just the crazies. People on both sides of every cultural debate in our country all use the Bible to bolster their arguments, and hopefully draw Christians into their support.

There comes a point when a reasonable person would not be blamed for throwing their hands up in the air and dismissing the whole thing. I mean, if anyone can make the Bible mean anything they want, then what possible good could it do as a source of guidance? Fair question.

Two ways to tangle up your reading of the Bible.

The reason people think that anything can be proven from the Bible comes from two common mistakes.

Our first problem is that we just hate complexity so much. We love the easy-to-quote lines that work well for mugs, Facebook posts, and arguments.

For example, it’s far easier to quote Paul saying, “I do not allow a woman to teach or to have authority over a man,” than it is to study the context of that passage and learn about the important role of women in the early church across the New Testament.

The famous scripture “I can do all things through Christ who strengthens me,” is so encouraging and empowering. It sounds like a downpayment on all our hopes and dreams… unless we read the full context. Then we see Paul is most likely saying that Christ can strengthen us to bear up under terrible, painful circumstaneces—like being imprisoned for your faith. That’s a great promise, but one not quite so many people hope to need.

Many of us want simple black-and-white bumper-sticker-worthy statements from the Bible. We want them because they’re clear. They sound final and authoritative. Mostly, we want them because we don’t want to do the hard work of living with the Bible, and letting God to teach us, through an ongoing engagement with this powerful book.

This unfortunate desire leads to our second mistake.

2. We try to read the Bible like it’s a democracy.

When we quote specific verses in isolation, specifically for the purpose of proving a point, we are relating to the Bible as if is a policy manual, some list of standards and practices. We treat the Bible like it is a democracy, where every verse from cover to cover has exactly equal say and weight.  This is a complete misunderstanding of the nature and purpose of the Bible.

This is just not the case. Consider only two examples.

In the Sermon on the Mount in Matthew’s gospel, Jesus does something interesting. He says “You’ve heard it said…” and then quotes an Old Testament scripture. Then he says, “But I say unto you…” and proceeds to give a new and deeper interpretation of those passages.

Do you see what’s happening? Jesus’ words (which are in scripture) supersede the verses he was quoting (which are also in scripture). Biblical commands on adultery, divorce, making oaths, and how we see our enemy all get this treatment, among others. Jesus’ action here shows us not every verse of scripture carries the same weight.

In Acts 10, Peter had a vision. Now, he was a good practicing Jew who had faithfully followed the ceremonial cleanliness laws from Leviticus and Deuteronomy. Violating these laws left a person ceremonially unclean, unable to participate in the life and worship of the community. That included touching or eating with a gentile. Peter believed these were God’s standards expressed in scripture.

Then Peter had this vision where God made clear things had shifted. Food and people that were unclean in the Old Testament were now declared clean. Not only did this change the way Peter saw his food, more importably, it changed how he interacted with people who weren’t Jewish. This vision allowed Christianity to break out of the boundaries Judaism and into the rest of the world.

The instruction God gave to Peter in Acts 10 superseded the instructions from earlier in scripture. Acts and the rest of the New Testament assume that followers of Jesus will live in alignment with this newer revelation, rather than the older perspective from the Torah. This is just two examples!

Sometimes selective reading is the most Biblical.

The Bible itself teaches that there is a hierarchy of authority within the Bible. Plainly put: Certain verses are more important, binding, or authoritative, than others. Sound different than what you learned or thought? Maybe this makes you a little bit uncomfortable. But understand: this is something even the most strict literalists act on already–een when they say they don’t.

For example, Psalms 137:9 literally says that the person who grabs your baby and smashes their head on a rock is happy. No literalist I’ve ever met says that verse is authoritative over your life. Why not?

First, it violates the 6th commandment. Second, it violates Jesus’ words in Matthew 5. Third, it’s poetry, and poetry is read differently than policy. Finally, when you read the whole poem, you see that the “you” in verse 9 is “Daughter Babylon,” not any old “you” you might want to substitute. Reading the verse in it’s accurate context and through the lens of more authoritative verses gives you the best understanding.

Another example. Deuteronomy 23:1 says that any man with a genital defect isn’t allowed to participate in worship. Now, I have never met any pastor who has a plan for enforcing this in their church. Why? Because nearly every Christian church teaches that these community-defining standards from Leviticus no longer apply.

How can we make this claim? Aren’t we picking and choosing? No! First, Isaiah 56, which comes later chronologically, says that God welcomes eunuchs. Second, this is one of the ritual cleanliness laws that God freed the church from in Acts. Third, in case all of this is still unclear, one of the very first converts to Christianity was an Ethiopian Eunuch. He was welcomed into the church on the basis of a short Bible study and baptism. Philip never one asked him about the state of his genitals.

People often say they just believe the Bible and do what it says. This is never true! Everyone who reads the Bible makes priority decisions about which texts to give more weight to. We make the judgement that certain verses, or certain voices within scripture, have higher authority than others.

If you grew up in a more conservative or fundamentalist church and home, that statement probably feels uncomfortable to you. It may sound like I’m advocating tossing out precious truth and the authority of the Bible. I’m not. The Bible itself tells us that certain verses supersede other verses. Certain verses become the lens through which we see others. We aren’t expected to treat a story about Israel’s military campaign against its enemies with the same weight that we treat Paul’s letters to the church. Even Paul’s writing must always be subservient to and interpreted in light of Jesus’ words and actions.

When we pull individual verses out of the narrative without any attention to the larger narrative they fall within, we run the risk of trying to prove something that the Bible isn’t ultimately saying. It’s a little bit like assuming that because characters in The Adventures of Huckleberry Finn by Mark Twain use racist language, that Mark Twain was advocating and supporting racism. That’s clearly a bad reading of the book, but we read the Bible that way all the time!

Let’s make sure we’re hearing what the Bible is really saying.

The Bible is a book for grown-ups. What I mean is that it requires our engagement and reflection. It requires thought, study and discovery. It challenges us to seek God, and to keep on seeking, even when the “moral of the story” isn’t obvious.

Now just because we have to make decisions about which parts of the Bible to weigh more heavily, doesn’t mean it’s potluck time, where we can all just pick and choose the parts we like. If we recognize that there is a hierarchy of voices in the Bible, and that there is a narrative flow that moves through the book, we discover something else vital. We don’t have the leeway to determine that hierarchy ourselves. The Bible itself, particularly the revelation of Jesus, will point us in the right direction.

We can’t take any old verse and make it mean what we want it to mean. Anyone who says so is ignoring what the Bible says about itself. In order to treat any verse with integrity, we have to read it inside its context. We have to know who said it, when they said it, and who they were saying it to. We have to know where it falls in the overall timeline and narrative of scripture. Only then can we begin to hear what scripture is really saying. Even better, over time we will become more familiar with that particular theme across the whole of scripture.

The Bible does mean something. It does say specific things. And it doesn’t say just anything anyone wants it to say.
If you come across someone who is using the Bible to support some authoritative viewpoint, don’t take their word for it. Read the verses they are quoting in context. Compare their interpretation against the overall narrative of the Bible. See what you learn. In many cases, the Bible itself will clear up the confusion.

24 thoughts on “2 Reasons using the Bible to prove your point is often wrong.”