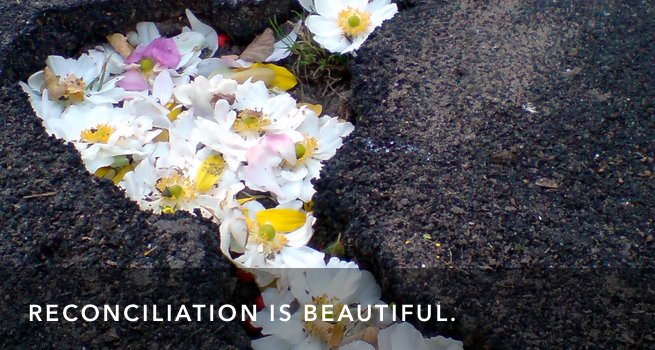 Why church?  It’s a question I’m hearing more and more.  Honestly, even as a pastor, it’s one I’ve asked myself a number of times.

Church is such a hassle, isn’t it?  First it’s too ragged and sloppy where anyone’s aunt Bertha can sing a wobbly-voiced solo that tests the boundaries of everyone’s brotherly love.  Then it’s too professional and slick, where only experts are allowed up front.  For some, the church is too exclusive and judgmental; for others it’s too permissive and accepting.

There are standards that can be really high.  Then there are folks who care an awful lot about being right.  There are broken people as far as the eye can see, making a mess and hurting each other.

So why on earth would someone want to be a part of something like that?  Why church?

A picture that cuts to the heart of the question.

I was thinking about this question this past week.  I also came across a blog post by Justin Zoradi.  Justin is the founder and executive director of These Numbers Have Faces, an organization that works to educate and empower young African leaders, and so change Africa from the inside out.  On his personal blog he wrote about a picture that moved him.  He called it the most powerful image you’ll see all week.

It’s a picture of Tim See hugging Takunda Mavima.  Why does this picture matter?

Because Takunda killed Tim’s son.  Takunda drove home drunk from a party and rolled his car down a highway embankment.  Three of his friends in the car went to the hospital.  Two more went to the morgue. (The whole story unfolds here, here, here and here.)

This is a parent’s worst nightmare.  Tim’s son, also named Tim, was a good student, well-liked, ready to graduate.  The future was wide open for him.  But Takunda drove him home drunk and the family went from planning a graduation party to planning a funeral.

Now, a story that was just about a teen killed in a drunk-driving accident wouldn’t generate as much noise on the internet.  It’s sad to say, but it’s true.  It just happens too often.  What made this story different was that image and the story behind it.  At the sentencing hearing Tim See and his daughter Lauren used their “victim statement” to plead for lenience in Takunda’s sentence.

“I am begging you to let Takunda make something of himself in the real world– don’t send him to prison and get hard and bitter, that boy has learned his lesson a thousand times over and he’ll never make the same mistake again.”

Tim See had forgiven the one who had killed his son.

Fierce reconciliation is the heart of the church.

As I was reflecting on this incredible story, it occurred to me that this is one of the main reasons I stay involved in the messy, sometimes painful, never-quite-right community of “organized” church.  This story had captured for me why church matters.

During the course of Jesus’ life, He essentially did two things.

First, He made available reconciliation between humanity and God. The Bible says that we are made in God’s image, that we reflect something of God’s character. That means we’re good, and we can do very good things. But something is flawed in us. There is this drive to pride and ego, this need to self-justify, a desire to get what we need or want at other people’s expense.The Bible calls this sin. Sin creates alienation, separation. It breaks our relationships with each other, and it breaks our relationship with God, our source of life.

So Jesus came and in His life and death, He bridged that gap. We are offered reconciliation–Forgiveness for our sin, hope for our hearts, the knowledge that our past doesn’t define us, and, a real and life-giving connection with God. That’s amazing. But that’s not the only thing that Jesus did.

2) Jesus created a community of reconciliation.

Jesus also established the church. See, wherever two or more people in the same place start following Jesus, something happens. When those people understand that they have been reconciled to God, they begin to become reconcilers with each other and the world. And when you have that, you have the church.

The common picture that people have in their minds when they hear the word “church” isn’t accurate. The church isn’t a building that you go to. It’s not a worship service that you sit through. It’s not an organization that you belong to. Church is a group of people, who are caught up in the reconciling mission of Jesus.

It turns out that Tim See is a follower of Jesus. In that picture he is doing the hardest thing I can imagine. He is forgiving the one who killed his son. That reconciliation is opening the doors of possibility:

This is what reconciliation does. It creates the opportunity for new life. That’s why church matters, at least for me. Maybe your experience of church is wonderful right now with good community, spiritual direction and energy.  Maybe your experience of church right now isn’t.  Maybe it’s confusing, or stuffy, or even painful. And yet, this place–the intersection of a reconciled relationship with God, and reconciling relationship with each other–is where God shows up.

The community God creates through Jesus is this: A community of reconciliation that brings the possibility of new life. At it’s core the church is a movement of people who know that the miracle of reconciliation is possible, a movement of people who are so taken with the possibility that they want to be a part of bringing this miracle to the world.

The church is a community of reconciliation that brings the possibility of new life.

That’s why I’m still here. That’s what I want to experience and help create. Does that move you? Does something within you jump at the possibility? If so, maybe God is calling you to be about it too.

Note: I developed this content further in a presentation of mine.  You can watch it on Youtube. October 6, 2012.  “Why Church?”

Previous: You might be perishing, and why that stinks.
Next: Time to stop trying too hard.

7 thoughts on “Why Church? Because of This Picture.”