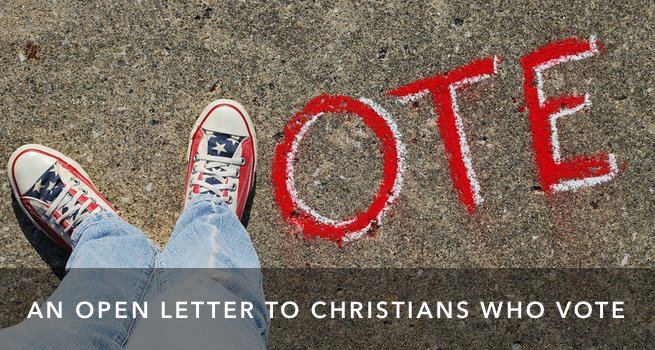 The election cycle is upon us. Pundits and partisans are powering up for another opportunity to seize the political football. 50% of self-identified Christians vote, some quite loudly, with a sense that this is the chance to “make a difference in the culture” by getting the right people in places of power.

Before the negative ads start flying, and we’re inundated with waves of questionable information from every side, can I get a moment of your time?

You might be wondering who I am and what my agenda is in the whole political conversation. Fair question.

I’m one of you. Have been all my life. Dad was a pastor. I went to church schools through high school. Prayer meetings, Vacation Bible School, church socials, revival meetings—the whole deal. I’ve been a pastor now for just about twenty years.

I’m also a life-long American, profoundly grateful for the lottery I won by being born here. I’m thankful for a society that values freedom of speech, freedom of association, and freedom of religion. I believe in the promise of America. I also think we need to do a much better job ensuring this promise is available to everyone, regardless of their speech, association or religion (or lack thereof.)

I love Jesus; I love the church. I think our voice in culture matters. So, take my words gently, as words from a friend. As the political season gets rolling, I’d like you to consider three things. If we get these things wrong, we compromise our influence in society, and (I think) miss where Jesus was leading us.

1. The “Culture War” is an invention of people who want to manipulate you.

Followers of Jesus have existed in pluralistic societies before. In fact, the world the New Testament was written in was more like today in this regard than at any other time in history. Being surrounded by people who believe differently than you isn’t a bad thing.

But there are people who want you to believe this lie. They invented the idea of “Culture War.” This language is intentionally polarizing. It forces you into a corner, leading you to imagine that people not like you are enemies. The language of war is a way to create unity. “Don’t you know, it’s US against THEM!” The propagators of this story want you to get in line.

Democracy is a political system built on compromise. If you are unwilling to compromise politically, you don’t really want democracy, you want a dictator who agrees with you.

It is quite possible for you to hold to your Christian beliefs and live out your personal standards without compromise, and at the same time, vote in ways that represent wise and thoughtful compromise with people who think differently than you.

Be clear: This isn’t an attack on your beliefs! You are being told that your religious freedom is being assaulted, but this is a lie. Religious freedom only exists as a two-way street. When only your group can worship and live the way they believe, that’s called Religious Privilege. Religious Freedom is when everyone is allowed to worship and live according to their conscience—even folks you disagree with.

Living in a culture where people live and think differently than you isn’t something to be afraid of. It’s a welcome opportunity. The pundits and preachers who tell you differently are trying to scare you. John’s first small letter tells us us that love and fear are incompatible. Fear is always a suspicious motivator, one that ought to make you question the intentions of the people telling you to be afraid.

2. Participate in politics not a soldier, but as a servant.

When the soldiers came to arrest Jesus, Peter tried to use his sword to protect him. Jesus told him in no uncertain terms this was not welcome. During his trial, Jesus said that his kingdom was not of this world. Jesus didn’t choose the tools of power in his mission, and Jesus’ people are not free to use them either. The sword is a sharp application of power, but politics can be as well.

Jesus taught us that our mindset toward others is to be other-centered love. What does that look like in the ballot box? I don’t believe in issuing pastor-approved voting guides, so I won’t give you a list. I will just simply ask you to consider this question:

There’s another thing both Jesus and Paul taught us. We have no human enemies. Another name for Christianity is “the ministry of reconciliation.” Our goal is always to be calling people together, mending what’s broken, inviting people to consider God’s way.

When we think of people who disagree with us politically as enemies, we are not following Jesus’ teaching or example. Be clear. Jesus did not send us into a war. This doesn’t mean we ought to give up our voice regarding the state of culture. When we vote, it’s an act of service. When we talk about politics, we need to do so in a way that treats the people around us with dignity and respect.

3. Remember our calling is heart change, not regime change.

The worst and most egregious failures in our history were all cases where politics and power got married to Christian culture. Christianity and power rarely make a good couple. When you are in power, you can force your agenda on others. That was never Jesus’ way!

That just doesn’t happen in the voting booth. You can’t vote heart change into being. You can’t hope the Supreme Court enshrines it in the constitution. You were not compelled to believe in Jesus! You were not forced into your moral beliefs. You were invited to choose.

Don’t let the intensity of the moment distract you.

Politics is important! I can get pretty worked up about the painfully ineffective work of our representative leaders in the last decade. Your vote matters and you should use it. When you choose to express your political rights and responsibilities, please do it in a way that reflects the calling of Jesus in your life.

Do we believe that God created humans in God’s image giving them inherant dignity? Then that needs to be expressed in our political conversations.

At the end of his ministry, Jesus did not commission us to “go therefore and form political coalitions, legislating them to obey all that I have commanded.” He did, however, tell us that we would be known by the kind of love we have for people. Jesus words: “By this everyone will know that you are my disciples, if you love one another.”

This election season, before you let the the foot-stomping energy of the crowd draw you in, take some time to think about what Jesus’ words might mean for you when it comes to participating in the polical conversation all around us.

You are an American. But you are first a follower of Jesus. Let that shape the way you participate in the incredible (and often incredibly frustrating) political process that makes our country unique.

Previous: Weekend Wisdom / How to read the Bible when you keep getting bogged down in Leviticus
Next: 4 Promises from God, including 1 I’d rather skip.

14 thoughts on “An Open Letter to Christians in Election Season”