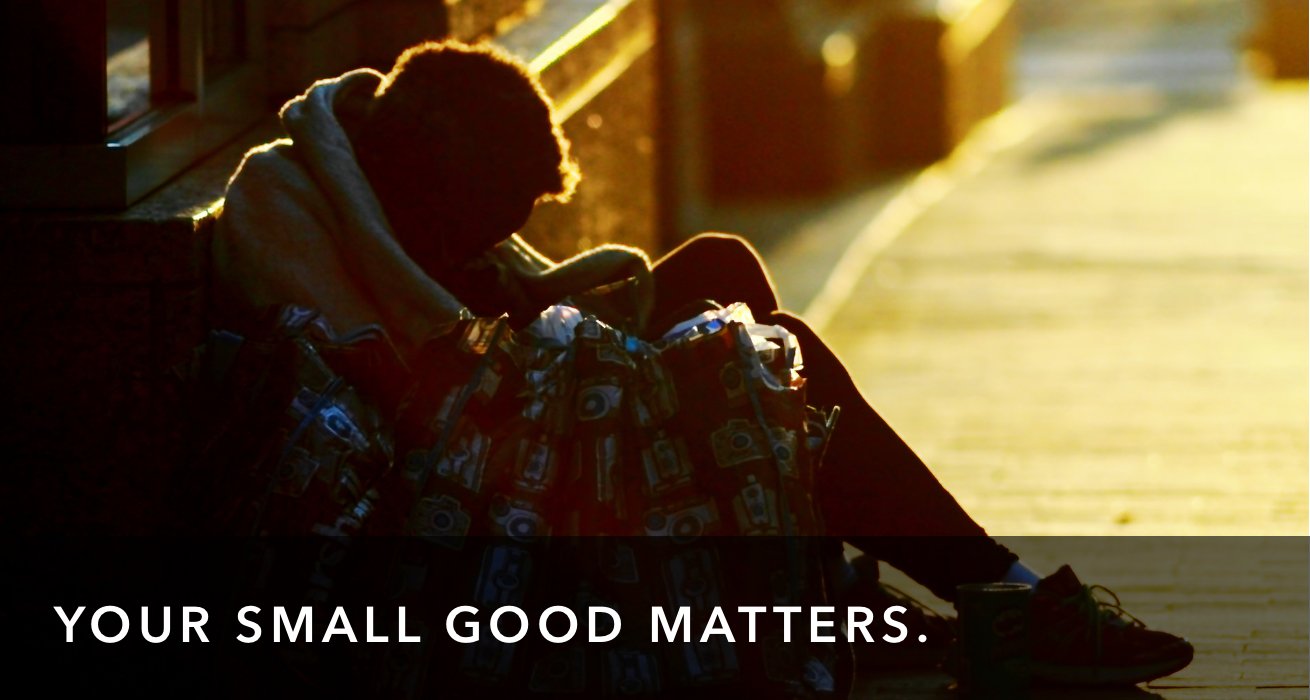 From time to time, I share with you a guest post, when I find one that’s particularly helpful. This short story, from Richard Spillman, is such an encouragement. So often we get discouraged because the small good we do in Jesus’ name can seem to not make much of a difference. Ever feel that way? Here’s Richard’s words:

A Blanket for Rachel

It was a cold and wet Sunday morning in June of 2006 when my wife, Bonnie, and I met Rachel for the first and only time.  We serve at a church for the homeless of Tacoma called the Downtown Crossing.

This particular morning, as we do every Sunday, we went outside at 7 am to welcome people into the church service.  I greeted the usual group of friends all of whom looked tired from spending the night on the streets.  Then I noticed a small, African-American woman sitting on her backpack and leaning against the side of the church.

We went over to her and introduced ourselves.  Bonnie asked her if she had been able to sleep in a shelter that night.  Rachael told us that she had tried to get into a local shelter; but she had been near the back of the line.  The shelter filled up before she could get in.  She had tried to sleep outside, but she was too uncomfortable to get any real rest.

Now she was tired, cold, and hungry.  This is not an unusual story because there are many more homeless on the streets of Tacoma than there are beds available in the local shelters.

It was then that the Spirit led Bonnie to ask Rachael if she had a blanket.

Rachael told us that her backpack had a few clothes in it, but no blanket.   It just so happened that Bonnie and I had brought several blankets with us, including one that was brand new and still in its original wrapping.

This was a miracle in its own right because this was the first time we had brought blankets with us to the church.  I ran to the car, got the blanket and gave it to Rachael. It was as if we had handed her a million dollars.

She tore it out of the package and wrapped it around herself.  She bunched up one end of the blanket to form a little pillow and rested her head against the church wall.  Then she went to sleep.  A little thing like a blanket brought a moment of peace and rest into her life.  Later I saw her at the worship service standing and singing praises to God still holding onto that blanket just like Linus from the Peanuts cartoon.

We have not seen Rachael since that morning.  We do not know what happened to her, and we pray that she found permanent housing.  But, the story of the Rachael’s blanket does not end with Rachael.  It goes on and on.

I shared the story of Rachael and the blanket with a friend.

She was as touched as Bonnie and I were and several days later she shared it with another friend who happened to be in charge of a large rummage sale for a local private school which, over the years, gown into a major event.  For three days every year, the school sold a football field’s worth of almost new donated items.  A lot of good clothing was always left over at the close of the sale.

As a result of Rachael’s story, the woman in charge of the rummage sale invited Bonnie and me to come on Sunday at the conclusion of the sale to take as many clothes as we could carry to give to the homeless.  We gathered some volunteers from our church to help us out.  By the time we were done we filled 27 large garbage bags and three large boxes with good quality clothing that Sunday.

Much like the tiny fish that ultimately fed 5,000, the little blanket we gave to Rachael on that cold Sunday morning ultimately clothed hundreds of homeless men and women in Tacoma!

This is a story that has no ending because now we collect clothes from that rummage sale every year.  As of now the total is two and a half tons of clothes. Who knows what the final tally will be for the story of the blanket.

How far God will take it and how He will continue to use it is beyond our comprehension.  Every time that I tell this story it brings a tear to my eye and sends chills up my back because it taught me that God is still at work multiplying our efforts to bring peace to His children.

You’ve been doing some good things. Maybe justice work. Maybe care for the poor. Maybe sharing grace and love with folks whose faith has been broken by fundamentalism. You do it because Jesus has led you to that place. You do it because it seems right. But sometimes the weight is heavy, and it’s hard to see if your little bit of good is making a difference.  Well, friend… take heart in Richard’s story. You may not get to see a miracle of “multiplying blankets,” but you are participating in the work of the Holy Spirit in the world. The small good you do matters.  – Marc

Previous: The Freedom To Not Get Your Way (TAW004)
Next: Making Friends With Your Limits (TAW005)

8 thoughts on “A Blanket for Rachel”