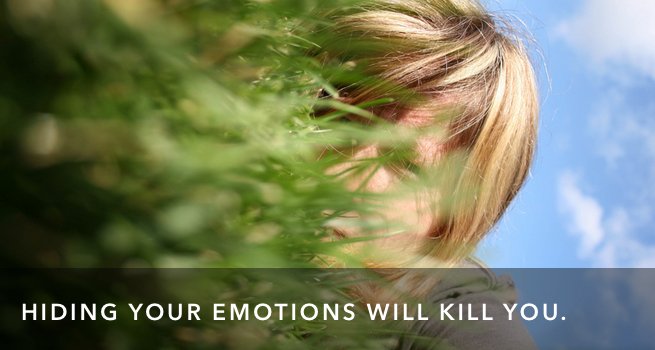 Is Christianity killing you? It nearly killed me.

Faith is supposed to give life, abundant life. That’s what Jesus said. Instead this amazing community of faith that has so deeply shaped me, has often given just the opposite.

It’s happening because one of the implicit teachings of the modern church is this:

Stop feeling and die. Or feel and live.

I grew up in a fairly conservative, even fundamentalist, faith community. It was homey. It was safe. It was filled with nice people. But it was also a place where I learned that my emotions weren’t appreciated. In the most generous spirit, my emotions were considered immature distractions. But there were times when emotions were treated as the very influence of Satan.

Thomas Merton wrote that it often seems like our Christian beliefs have, “merely deadened our humanity, instead of setting it free to develop richly, in all its capacities, under the influence of grace.” That’s been my experience exactly. Maybe you’ve felt that too.

As a result, I grew up not treating my emotions very well.

Over the years the consequences have been a disaster. I struggle to build and maintain friendships. I had a hard time being authentic with my own emotions, and an even harder time expressing them to others. I still have a hard time with intimacy. My marriage, my closer friendships, my role as a leader in my church all bore the weight and damage of my emotional immaturity.

Christianity that doesn’t include your emotions will kill you. Tweet That.

A good therapist, building new friendships, lots of reading and journaling, doing the hard work of building new habits and taking emotional risks, prayer with words and painful wordless prayer in my gut are all a part of my recovery. It continues to be a long hard road back to who God made me to be, but this healing is happening.

Irenaeus, one of the early church Fathers, wrote, “The glory of God is a human being fully alive.” I had always thought that God got the most glory when I was good, or when I was doing ministry. Those things are certainly a part of the puzzle, but it’s so much more.  As an artist, God’s glory is seen when His art is fully expressed.  That means a life fully lived.

Peter Scazerro, a pastor who has spent a lot of time thinking about emotions and faith, wrote: “To feel is to be human. To minimize or deny what we feel is a distortion of what it means to be image bearers of our personal God. To the degree that we are unable to express our emotions, we remain impaired in our ability to love God, others, and ourselves well.”

Eugene Peterson, pastor, author and translator of The Message Bible said, “You don’t become more spiritual by becoming less human.”  God’s design is that you would mature in the image of Christ. That means that you would grow up into the fullness of everything GOd created you to be. That includes whole and maturing emotions.

If like me, this is an area of life that needs attention, there are things you can do to start the shift.

As you become more aware of what’s happening within you, more steps will present themselves. I became aware of certain areas that I needed to learn more about, and set out to do that. I came across areas of my heart that I knew I needed outside help with, and that led me to find a good therapist. Unlearning old emotional habits takes a long time, but it’s worth it.

Your faith can be, in Merton’s words, something that sets you free to grow in all your capacities, under grace.  Let me know how I can help.

Question: How do you see the connection between your faith and emotions?

Previous: Need to Get Unstuck? Start Again.
Next: Is the Pope a kidnapper? That Question is a Trap.

5 thoughts on “Keeping feelings and faith separate can kill you!”